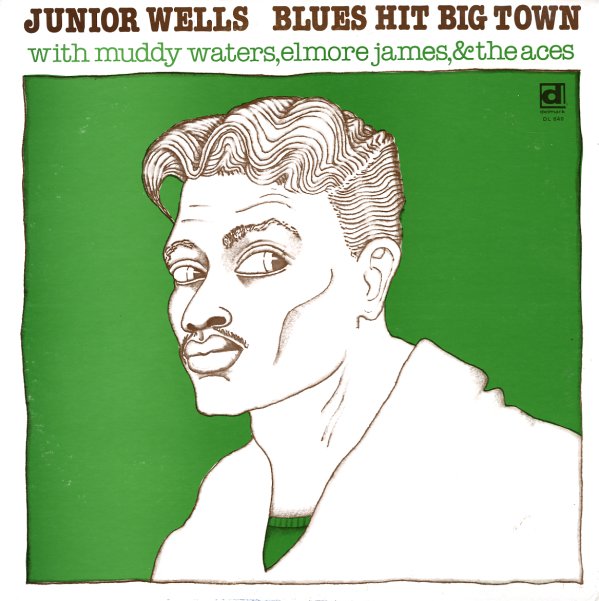 Some of the first recordings ever from Chicago legend Junior Wells – made for the small States label in the Windy City, many years before Wells exploded out with much greater national fame! The music here has Junior stepping into the same early electric space that Chess Records was cutting at the time – and given the presence of Muddy Waters, Otis Spann, and Willie Dixon on some of these sides – the group's also not far off either! Wells is the main star throughout, though – alternating bold young vocals and razor-sharp harmonica lines – in the company of players who include Louis Myers, Elmore James, and Muddy Waters on guitar, Johnnie Jones and Otis Spann on piano, Willie Dixon on bass, and Odie Payne on drums. Titles include "Hoodoo Man", "Tomorrow Night", "Eagle Rock", "Junior's Wail", "Throw This Poor Dog A Bone", "So All Alone", "Blues Hit Big Town", and "Lovin Blues".  © 1996-2022, Dusty Groove, Inc.
(White label N Lincoln pressing.)

More Real Folk Blues
Chess, Mid 50s. Very Good-
LP...$39.99
A much earlier set of tracks than the first volume of Real Folk Blues from Howlin Wolf – mostly material recorded in the mid 50s, both in Chicago and Memphis – all with a really nitty gritty sort of feel! There's a rough and rootsy mode going on here – one that has Wolf's raspy ... LP, Vinyl record album

Tip On In
Excello, Late 60s. Near Mint-
LP...$39.99
One of the last albums ever from the mighty Slim Harpo – but also one of the best, as the bluesman is giving plenty of nods to the funk and soul artists who were influenced by his music – and returning the favor with a wonderfully raw set of grooves! Slim's a master on all fronts ... LP, Vinyl record album