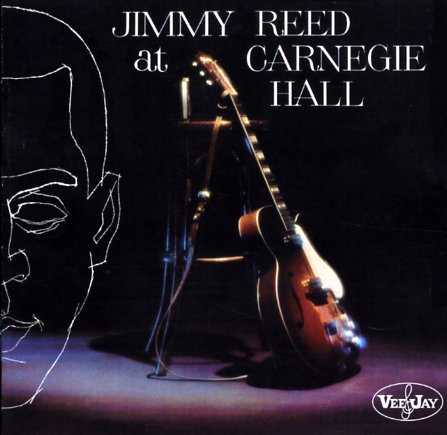 Rollicking country-tinged blues from Jimmy Reed and an incredible group of backing musicians – actually not captured in the opulent grandeur of Carnegie Hall – and probably all the better for it! Prior to the original double LP release of Jimmy Reed At Carnegie Hall, Reed headlined a Blues At Carnegie Hall event, and though the performance was not recorded for a live album release he went on the cut a similar set list with varying players that included Lonnie Brooks, Phil Upchurch and Eddie Tayor on guitar, Willie Dixon on bass, Earl Phillips and Albert King on tracks. It's really wonderful stuff, obvious epiphany material for loads of rockers and young players on both the US and British blues scenes to come! 23 tracks in all: "Bright Lights Big City", "I'm Mr Luck", "Found Joy", "Kind Of Lonesome", "Tell Me You Love Me", "Hold Me Close", "Baby What You Want Me To Do", "Blue Blue Water", "Hush Hush", "Found Love", "Honest I Do", "You Got Me Dizzy", "Boogie In The Dark", "Take Out Some Insurance", "The Sun Is Shining" and lots more!  © 1996-2022, Dusty Groove, Inc.
(80s Suite Beat pressing in a non-gatefold cover.)