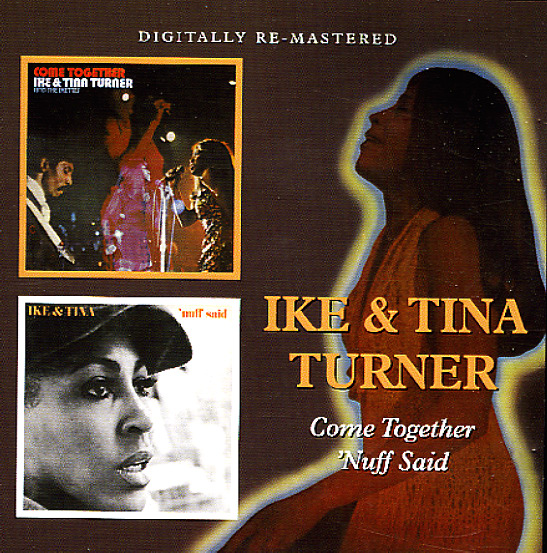 A pair of Ike & Tina Turner classics – back to back on one CD! First up is Come Together – a key crossover set for the soul duo! Ike and Tina Turner crossed over big by this point in their career – grabbing a lot of ears that were mostly listening to rock music, but who finally got that many of their heroes were influenced by the pair – who were then throwing things back towards all their copycats with a record like this! Case in point is the album's famous cover of "Come Together" – which has Tina hitting some of her slinkiest, sexiest modes on record – while also mixing things up with plenty of deep soul elements on other tunes too! There's a great blend of rock and soul – Fillmore vs Muscle Shoals – and in addition to "Come Together", other titles include "Contact High", "I Want To Take You Higher", "Honky Tonk Woman", "Evil Man", "Doin It", and "Young & Dumb". Nuff Said is one of the most iconic albums from the team of Ike & Tina Turner – a set recorded at a time when the duo were complete superstars in both the world of rock and soul – and were able to step out with a heck of a lot of power in the grooves! Ike produced and arranged the album in his studio, and he also changed the name of Kings Of Rhythm to The Family Vibes – showing that strong shift they'd made into funkier modes for the 70s – augmented here by the presence of Leon Ware's songwriting talents on a number of the songs. Tina's the real star, of course – and sounds tremendous on titles that include "Baby", "Sweet Flustrations", "I Love What You Do To Me", "Tell The Truth", "I Love Baby", and "Nuff Said".  © 1996-2021, Dusty Groove, Inc.