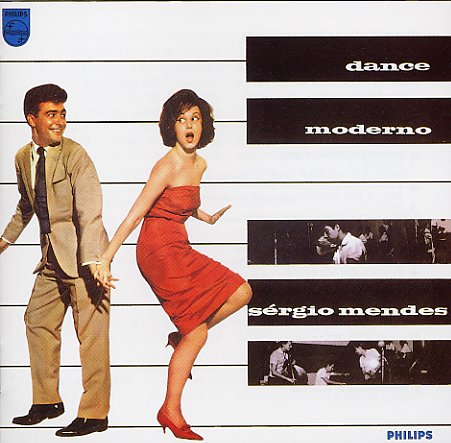 Also available
Sergio Mendes — Dance Moderno ... CD 9.99
The fab first album by Sergio Mendes – very different than his later work! Sergio's more in a straight bossa mode here – playing with a tight little combo that features saxophone and trombone next to his own firey work on piano – tight and jazzy, and even with a few traces of US Latin grooves as well! The album's proof that Sergio was already at the top of his game in the early years – and although released at the end of the 50s, the record's got a groove that would set the scene for countless bossa jazz albums to follow! Titles include the hard groovers "Oba-La-La" and "Outra Vez", plus versions of American jazz groovers like "Nica's Dream" and "On Green Dolphin Street" – and the cuts "Tema Sem Palavras", "Disa", "Diagonal", "Love For Sale", and "Satin Doll".  © 1996-2022, Dusty Groove, Inc.
(Out of print, 1998 Japanese pressing with obi!)

Sergio Mendes' Favorite Things
Atlantic, 1968. Used
CD...$9.99
A sweet little pairing of the keyboards of Sergio Mendes and the early arranging styles of Dave Grusin – and a set that's quite different than some of Sergio's vocal albums with Brasil 66! The style here is all instrumental – and Mendes plays both piano and electric piano, plus a bit ... CD