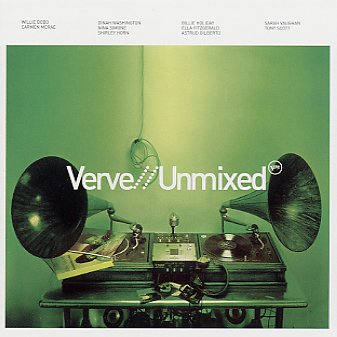 A great set of older tracks – at a really nice price! The package features 12 older jazz and vocal tunes that formed the basis for the slick new set Verve Remixed – the original versions of tracks on that set, offered here without any remixing, so that you can put the classics back to back with the new ones, for comparison! And even if you haven't heard Verve Remixed, the package is still a wonderfully priced set of tunes – with a wealth of great vocal jazz performances that are a treat to listen to, no matter what the setting. Titles include "Who Needs Forever" by Astrud Gilberto, "Strange Fruit" by Billie Holiday, "Hare Krishna" by Tony Scott, "See Line Woman" by Nina Simone, "Return To Paradise" by Shirley Horn, "Feelin Good" by Nina Simone, "Is You Is Or Is You Ain't My Baby?" by Dinah Washington, and "How Long Has This Been Going On" by Carmen McCrae.  © 1996-2022, Dusty Groove, Inc.