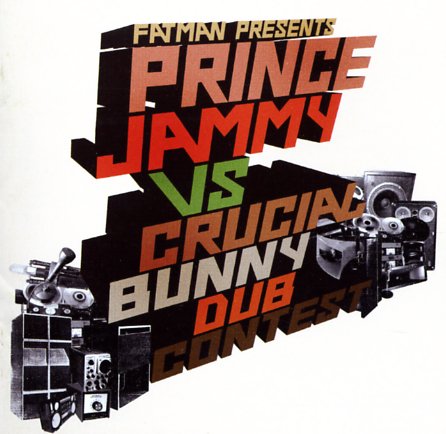 A seminal LP of dub confrontation, where London Sound System commander Fatman pits the then up and coming Prince Jammy against relative unknown Crucial Bunny for a massive rhythm battle! Jammy and Bunny go nuts flexing their dub techniques on hard and heavy rhythms cut at Channel One and Harry J's by an all star cast of the usual suspects that includes Sly and Robbie, Fully Fullwood, Ranchie McLean, Santa Davis, Skully Sims, Jackie Mittoo, Chinna Smith and others, who keep the proceedings raw and rootsy. This long lost selecter's choice dub album features the 8 numbers of the original release, including "Jammys A No Fool", "Jammys On The Move", "Jammys A Shine", "Jammys A Satta", "Bunny Is Crucial", "Bunny Na Jest", "Bunny A Warrior" and "Bunny No Easy", plus the CD adds four excellent bonus tracks, previously only released as dub plates: "Feel Jammys Spirit", "Jammys Too Bad", "Wild Wild Bunny" and "How Bunny Feels".  © 1996-2022, Dusty Groove, Inc.
(Out of print.)

Studio One Supreme – Maximum 70s & 80s Early Dancehall Sounds
Soul Jazz (UK), Late 70s/Early 80s. Used
CD...$14.99
An album that definitely earns its title – as it marks the renewed strength of the Studio One label in the late 70s – an era when much of the reggae mainstream had moved to the major labels, but the tiny Jamaican indie was well-poised to stand supreme in the new wave of dancehall sides ... CD