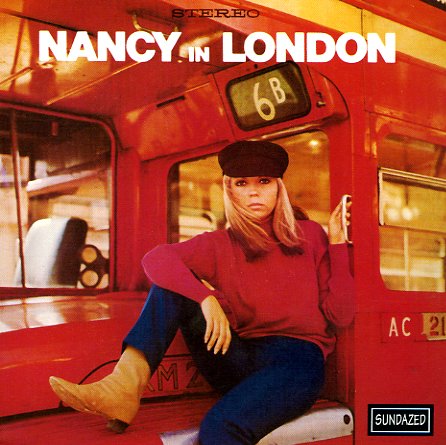 Nancy Sinatra recording in London, but still getting some heavy help from Lee Hazlewood – who wrote about half the tracks on the record, and also guest stars on one number too! The backings are fuller than some of Nancy's other Reprise albums – clearly going for some of the jaunty modes of UK girl pop of the time – but most numbers still have that undeniable Nancy charm, sung in breathy vocals that still seem to have their own space away from the larger orchestrations. Titles include "Friday's Child", "Hutchinson Jail", "Shades", "This Littler Bird", "I Can't Grow Peaches On A Cherry Tree", "The End", and "Step Aside" – plus "Summer Wine", which features Lee.  © 1996-2022, Dusty Groove, Inc.
(Mono white label promo pressing. Cover has a return address sticker, light wear & aging. Includes Reprise inner sleeve.)

Nancy & Lee
Reprise, Late 60s. Very Good-
LP...$14.99 19.99 (LP...$23.99)
One of the weirdest, wildest pop albums of the 60s – maybe the crowning achievement of both Nancy Sinatra and Lee Hazlewood – two artists who'd worked together before, but never with an intensity this great! The record is overflowing with all the great touches you'd expect from Lee ... LP, Vinyl record album

Leon Thomas In Berlin
Flying Dutchman, 1971. Good Gatefold
LP...$3.99
A wonderful live performance by vocalist Leon Thomas – and a set that seems to link together both his own excellent solo material of the time, and his key Impulse recordings with Pharoah Sanders! The group here is a small one – with the wonderful Oliver Nelson on alto sax, showing off ... LP, Vinyl record album

Lonely Girl
Liberty, 1956. Very Good
LP...$9.99
Looking like she does on the cover, it's hard to imagine Julie London being a lonely girl – as she's very seductively posed, with that slinky bare shoulders look that no doubt helped many of her early Liberty sides sell so well! But apart from the cheesecake, the record's one of Julie's ... LP, Vinyl record album