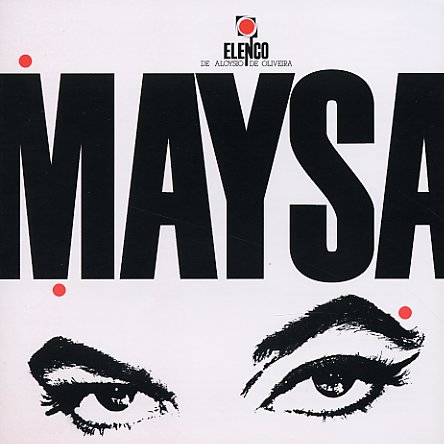 A lovely album from Brazilian singer Maysa – one of her first efforts ever, and done in the sweet style of the legendary Elenco label! The set's a live one, and features light bossa arrangements by Eumir Deodato – played by a combo that includes Deodato himself on organ and piano, plus vibes by the engimatic Ugo! Maysa's vocal tone still has some of the drama of later years, but the bossa arrangements really give the whole thing a lighter, livelier feel – one that we really love! Titles include "Demais", "I've Got You Under My Skin", "Dindi", "Bouquet De Izabel", "Fim De Noite", and "Bom De Tristeza".  © 1996-2021, Dusty Groove, Inc.
(Out of print.)

Barquinho
Sony (Brazil), 1964. Used
CD...$14.99
A classic album by Maysa – one of Brazil's most evocative vocalists of the 60s, recorded here in a lovely session of bossa tunes that begins with her stunning reading of "O Barquinho"! There's a core jazz group backing Maysa up – and strings and larger orchestrations drift ... CD

Vinicius & Odette Lara (Japanese pressing)
Elenco (Japan), 1963. Used
CD...$9.99 (CD...$13.99)
A dream of a bossa session – the kind of cool, yet sophisticated session that made the 60s Elenco label so great! The album features vocals by the completely lovely Odette Lara – a blue-tinged singer who really gets at the melancholy in the music – which is superbly underscored ... CD

Um Show De Bossa
Elenco (Japan), 1963. Used
CD...$9.99
A live bit of bossa vocals from Lennie Dale – recording here with some cooking accompaniment from the Bossa Tres trio! The format is very spontaneous and relaxed – similar to an American live jazz vocal date of the time, but with a bossa groove instead – one that's a perfectly ... CD