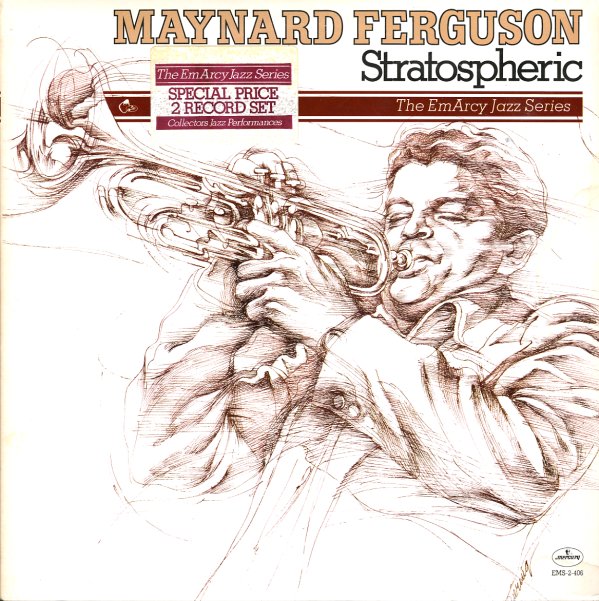 Great early sides for Emarcy – most recorded on the LA scene in the 50s, with players who include Herb Geller on alto, Conte Candoli on trumpet, Bud Shank on flute and alto, Bob Cooper on tenor, and Bob Gordon on baritone sax!  © 1996-2021, Dusty Groove, Inc.
(Cover has an index label with clear tape on the spine.)

MF Horn (70s pressing)
Columbia, Late 60s. Near Mint-
LP...$2.99
A brilliant album from Maynard Ferguson – one that owes a heck of a lot to Brit easy maestro Keith Mansfield! Mansfield produced the whole thing, and arranged with the help of Kenny Wheeler and Adrian Dover – and the whole record has the tightness of the best expansive Brit easy ... LP, Vinyl record album

Maynard '61
Roulette, 1961. Sealed
LP...$4.99
Incredible work from Maynard Ferguson – the kind of record that will blow you away, and make you forget all the cliches you've ever had about him! The album's a completely hip batch of big band work – grooving in a fresh, modern style that takes bits of Kenton and Evans, but also ... LP, Vinyl record album

Herb Geller Plays
EmArcy, Mid 50s. Near Mint-
LP...$16.99 (CD...$14.99)
A seminal piece of west coast bop from the mid 50s – featuring altoist Geller in group with wife Lorraine on piano, and either Curtis Counce or Leroy Vinnegar on bass, and either Larry Marable or Eldridge Freeman on drums. The groove's nice and hard, nice and stripped-down – and Geller ... LP, Vinyl record album

Chamblee Music
EmArcy, Late 50s. Very Good+
LP...$14.99
Lively R&B-tinged jazz material from this legendary Chicago tenorist! Chamblee was Dinah Washington's husband, and she brought him to the Mercury label for a few tasty sesssions in the late 50s, most recorded under her supervision. This session features great Chicago players, like Richard ... LP, Vinyl record album

Rhythm Crazy
EmArcy, Mid 60s. Very Good+
LP...$24.99
One of Cleveland's best albums ever – recorded with arrangements by Benny Golson and Gigi Gryce, both of whom give the album more of a soulful swing than you'd hear on some of Cleveland's earlier work. The group is a septet – with Jerome Richardson and Golson on reeds, Art Farmer on ... LP, Vinyl record album