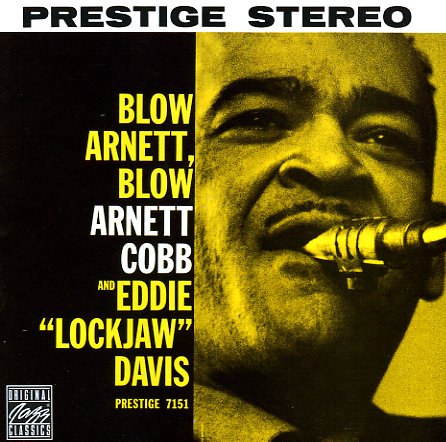 Blow Arnette does, at that – a killer tenor groove that's augmented here by some additional work from Eddie Lockjaw Davis! The pair really let loose on some of the tunes here – blowing in that older "battle" mode at points, but also laying back at times too – hitting a soulful ballad tone that almost reminds us of the late nite album Davis cut for RCA with Paul Gonsalves. There's some great organ in the lineup – played by Strethen Davis, a player who didn't record that often – and bass is by George Duviver and drums are by Arthur Edgehill. Titles include "When I Grow Too Old To Dream", "Go Power", "Dutch Kitchen Boogie", "Go Red Go", "The Eely One", and "The Fluke".  © 1996-2021, Dusty Groove, Inc.

Soul Meeting
Prestige, 1960. Used
CD...$9.99
Rare early King Curtis jazz session – cut in the years before he settled down to his tight short soul instrumental recordings for Atlantic. The record is very much in the Prestige soul jazz style of the early 60s – and King's set up nicely in a group that features Nat Adderley, Wynton ... CD