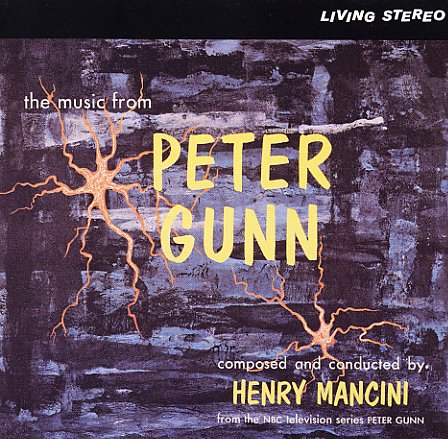 A classic! This is the record that made Mancini's career, and forever transformed the face of crime and jazz. The record's a stunning batch of instrumentals, played by a crack group of west coast players who also performed regularly in the TV show. Titles include the classic "Peter Gunn" theme, plus "Brothers Go To Mothers", "The Floater", "Brief & Breezy", "A Profound Gass", and "Dreamsville". Four bonus tracks – "Walkin' Bass", "Blue Steel", "Spook!", "Blues For Mother's".  © 1996-2022, Dusty Groove, Inc.
(Out of print.)

Music From Mickey Spillane's Mike Hammer
RCA (Spain), 1959. Used
CD...$9.99
Wonderful TV soundtrack work from Skip Martin – who's really giving Henry Mancini a run for his money in the crime jazz department! Martin's score for the Mike Hammer show here is totally great – penned with a range of styles that run from swinging to sentimental – all handled by ... CD