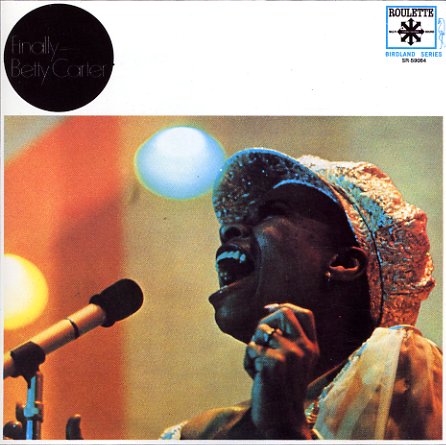 Mellow but compelling work from Betty Carter – singing here with the Norman Simmons trio in an album of material pulled from 2 different live dates in 1969. There's a few nice numbers where the group really opens up – and Betty pushes the envelope vocally, in a style that she'd explore more fully in her later work on her own label. The tracks are mostly standards, but the album features a great version of Randy Weston's "Ego", plus the tracks "All Through The Day", "Body & Soul", "I Only Have Eyes For You", and "Seems Like Old Times".  © 1996-2020, Dusty Groove, Inc.
(Out of print. Barcode has a cutout hole.)

Back To The Blues (with bonus tracks)
Roulette, 1962. Used
CD...$5.99
A bit different than some of Dinah Washington's other 60s work for Roulette – a set that's not entirely back to the blues promised in the title, but one that's definitely got a strong bluesy undercurrent! The backing's, by Fred Norman, aren't nearly as lush as on other Roulette sessions ... CD

Calling – Celebrating Sarah Vaughan
Blue Note, 2001. Used
CD...$1.99
The lovely Dianne Reeves pays tribute to jazz legend Sarah Vaughn, in a set that's one of her straightest jazz outings to date! The album features arrangements by Billy Childs, who plays on the album, along with Mulgrew Miller, Clark Terry, Reginald Veal, and Steve Wilson. Tracks include the ... CD

Vocalise
Blue Note, 1997. Used
CD...$2.99
With Joe Lovano on tenor, who also produced the album and arranged two of the tracks. CD