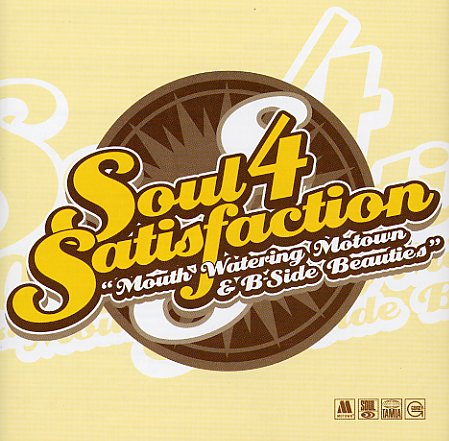 Rare Motown galore – and one of the best installments in the mighty Soul Satisfaction series! The set really opens up the Motown vaults – coming up with rare bits that move way past the hits and over-done oldies, into territory that sounds like nothing we remember from the mighty Detroit powerhouse of soul! There's a tremendous selection of work on this set – 24 tracks that include obscure singles from artists we never knew recorded for Motown, plus other work by artists who were bigger, but are represented here by some great lesser-known tunes! Titles include "Music Talk" and "Love A Go Go" by Stevie Wonder, "Time Is Passing By" by The Monitors, "My Kind Of Love" by The Satintones, "Who Wouldn't Love A Man Like That" by Mable John, "So Long" by Marvin Gaye, "Oh Lover" by Sheri Taylor & Sammi Ward, "Gonna Find A True Love" by Bottom & Co, "The Stranger" by Gladys Knight, "Ain't No Sun Since You've Been Gone" by Chuck Jackson, "I'd Be A Fool Right Now" by Stevie Wonder, "I Love You" by Chris Clark, "I Feel Like I'm Falling In Love Again" by Fantastic Four, "Can't Seem To Get You Out Of My Mind" and "Then" by Four Tops, "I Have Faith In You Baby" by Edwin Starr, and "The Chaperone" by La Brenda Ben & The Beljeans.  © 1996-2022, Dusty Groove, Inc.
(Out of print.)

Southern Soul Cellar
Dome (UK), 1970s/1980s. Used 2 CDs
CD...$11.99
A really unique collection of southern soul tunes – one that focuses on the warmer, modern sound coming out of Malaco Records in the 70s and 80s. Malaco was part of the Jackson, Miss scene – one that's not nearly as well documented as those in Memphis or Muscle Shoals, but which played ... CD

Greatest Hits (Epic pressing)
Brunswick/Epic, Late 60s/Early 70s. Used
CD...$5.99
Issued in 1983, but a good look back at the classic Brunswick years of this massive soul group from Chicago! The Chi-Lites are one of the best harmony acts ever to come out of the Windy City – and while at the Brunswick label during the late 60s and early 70s, leader Eugene Record forged a ... CD