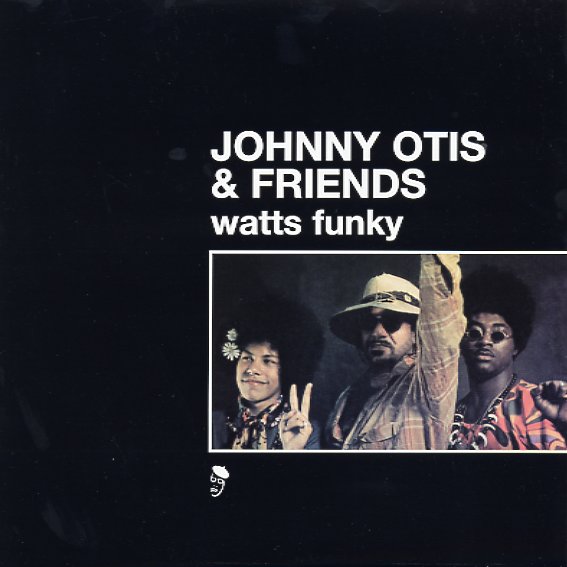 Also available
Johnny Otis & Friends — Watts Funky ... LP 18.99
Some of the greatest funky work you could ever hope to find by Johnny Otis! The package brings together tracks recorded by Johnny in his fantastic post-R&B years – the late 60s and 1970s, when he was scrappling around a variety of small labels, but also getting the chance to use that freedom to cut some incredibly great work! The spirit of the CD retains all the great feel of Johnny's funky live show – as it runs through a variety of different artists, from hip instrumentalists to sock-soul divas to Johnny himself, who's still sounding pretty darn funky at the time! There's some killer material here that makes the package an instant "must-have" for fans of heavy heavy funk – and titles include "Watts Breakaway" by Johnny Otis, "Country Girl" by The Johnny Otis Show, "But I Ain't No More (GSTSKDTS)" by Vera Hamilton, "Spells & Incantations" by Debbie Lyndsey, "Cool Ade" by Preston Love, "Funky Disco Boogie" by Demar & Carla, "I Don't Understand It" by Ice Water Slim & The Fourth Floor, "If You'd Be Mine" by Shuggie Otis, "Comin At Ya Baby" by Johnny Otis, "Jaws" by Johnny Otis, "Hey Boy! I Want You" by Barbara Morrison with the Johnny Otis Show, "You Got To Do It Right" by Willie Jitterbug Webb, and the killer "The Humpty Dump" by The Vibrettes! Also features the previously unreleased "Miss Pretty" by Shuggie Otis!  © 1996-2023, Dusty Groove, Inc.

Free Will (with bonus tracks)
Flying Dutchman/BGP (UK), Early 70s. New Copy
CD...$7.99 14.99
A really tremendous album from the legendary Gil Scott-Heron – and a set that stands as one of his greatest statements from the 70s! The record is a wonderful example of Gil's work in two different styles – sweet mellow jazzy soul, and harder heavier protest poetry – the latter ... CD