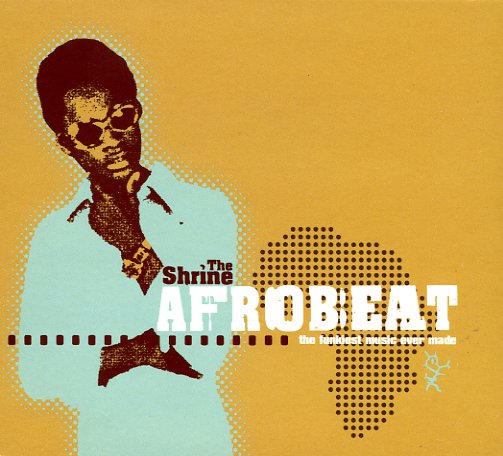 Shrine Afrobeat – The Funkiest Music Ever Made

Funky African – and dancefloor slammers, all of them! Max Reinhardt and the crew at Shrine compiled this set of 12 tasty groovers – and the set has a real London crossover dancefloor sound, with a mix of tracks along the same theme, but pushing the envelope of styles in the way that's had London leading the scene for years. The set's actually pretty nicely put together – and like the other titles on Ocho, it includes material of slightly more recent vintage, great stuff that we might have passed over due to our own snobbery for classic tunes. Titles include "Synchro System" by King Sunny Ade, "Fefe Naa Efe" by Fela, "Yegelle Tezeta" by Mulatu, "Watchi Wara" by Bantous Jazz, "Xihlaula Mane" by Kapa Dech, "NEPA – dub mix" by Tony Allen, "Yaba Funk" by Captain Yabaa, "Take Am So" by Gyedu Blay Ambulley, and "Funky Hi-Life" by CK Mann & Carousel 7.  © 1996-2021, Dusty Groove, Inc.
(Out of print.)