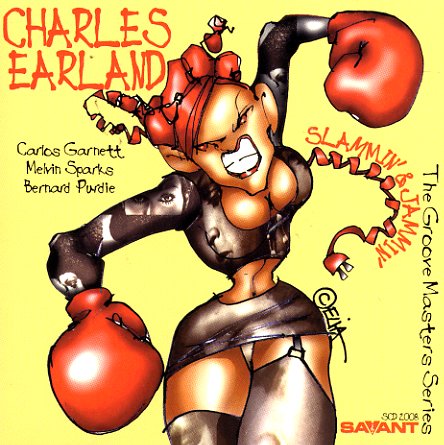 Charles Earland on Hammond organ – with Carlos Garnett on tenor saxophone, Melvin Sparks on guitar, Eric Sealls on bass, Bernard Purdie on drums, and Gary Fritz on percussion.  © 1996-2022, Dusty Groove, Inc.
(Tray card has a crease and one of the spines is separated, but has been reattached with clear tape. Barcode has a cutout hole.)

Third Degree Burn
Milestone, 1989. Used
CD...$9.99
A nice later set from the mighty burner, after he returned to the more bluesy organ based format from the more R&B and fusion inflected sets he'd released throughout the late 70s and early 80s. Though the rough edges are a bit more smoothed out on some of the numbers than we'd care for, the ... CD

Charles Earland In Concert Live At The Lighthouse/Kharma
Prestige, 1972/1974. Used
CD...$9.99
A great set that brings together 2 live albums from organist Charles Earland! Live At The Lighthouse is a real killer – with that tight jazzy groove that Earland had on his first few albums for Prestige, a mix of jazz funk and soul jazz, handled with an incredible touch on the organ! The ... CD

Front Burner
Milestone, 1988. Used
CD...$9.99
A wonderfully grooving late 80s set from Earland, with a great cast of supporting players, though their names may not be as well known as some of the heavies on his other records, the group has a wonderful vibe throughout the side. Ignore the couple of tracks that this record (and all of his ... CD

Dog Star
Savant, 2017. Used
CD...$9.99
Jerry Bergonzi has been making records for decades – yet lately, he seems to be finding an even fresher way forward – with a set like this that can grab us right from the very first note, and having us get excited all over again about his music! Bergonzi's tenor sound is tremendous ... CD

Intersecting Lines
Savant, 2014. Used
CD...$9.99
The title's a great one for this album – not just because tenorist Jerry Bergonzi always seems to have this forward-thinking, linear quality about his work – but also because his talents here intersect strongly with the alto sax of Dick Oatts! The pair really create some magic here ... CD

Mind Wine – The Music Of John Hicks
Savant, 2008. Used
CD...$12.99
A wonderful testament to the soul and sensitivity of the music of John Hicks – a loving tribute to the late, great pianist – handled here by some of his closest jazz associates! Even without Hicks' compositions, the group would be great enough – but given that John's musical ... CD