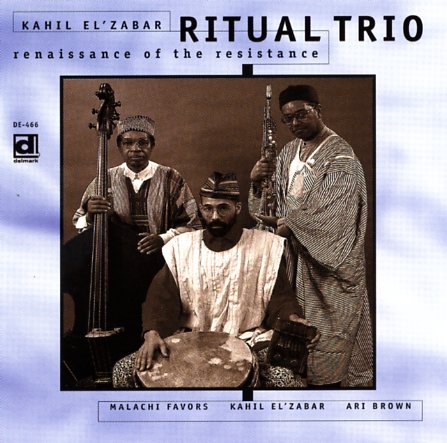 Renaissance Of The Resistance

Percussionist Kahil El'Zabar leads the Ritual Trio, and the group's one of the truest extensions of the AACM spirit to still exist in Chicago. No wonder, though, as it's got Malachi Favors of the Art Ensemble on bass, as well as multi-faceted reedman Ari Brown on saxes. El'Zabar's the real core of the group, though, and his soulful approach to percussion adds in a degree of warmth that always humanizes the work of the group, pushing it past simple virtuostic improvisation. This set from 1995 still has the group going strong – and it features many strong tracks, including "Sweet Meat", "Fatsmo", " Save Your Love For Me", "Golden Sea", "Trane In Mind", and "Ornette".  © 1996-2021, Dusty Groove, Inc.
(Barcode has a cutout hole.)