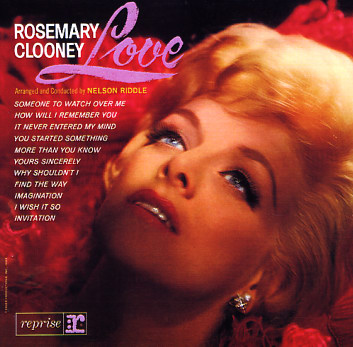 A really unusual album from Rosemary Clooney – recorded with lush backings from Nelson Riddle, in a style that gets past the lighter mode of earlier years! Clooney really opens up in Riddle's company – and hits a mature, adult mode that almost points the way towards directions Morgana King would take in later years. The tunes are all extremely well-chosen – and even the older numbers seem to have a more contemporary feel here, thanks to Riddle's unified arrangements throughout – an overall approach that avoids the "fast then slow then fast" mode that sometimes kept other Clooney albums from sounding like more serious vocal efforts. Titles include "Invitation", "I Wish It So", "Yours Sincerely", "Find The Way", "If I Forget You", "More Than You Know", and "Why Shouldn't I".  © 1996-2022, Dusty Groove, Inc.
(Out of print.)

It's A Quiet Thing
Reprise/Collectors Choice, 1965. Used
CD...$19.99 (LP...$5.99)
A rich effort from Morgana King – the first of her rare Reprise LPs – and a record that shows incredible range and an ability to bring a heavy, textural mood to just about any kind of tune! Torrie Zito's arrangements on It's A Quiet Thing are lush, but, well, quietly so – and ... CD

Man & His Music
Reprise, Mid 60s. Used 2 CDs
CD...$4.99
A very cool package – one that has Frank Sinatra narrating his career in music – as he performs re-recorded versions of classics, with backings by Nelson Riddle, Johnny Mandel, Count Basie, Gordon Jenkins, Don Costa, and Billy May! The spoken bits are wonderful – and the whole ... CD