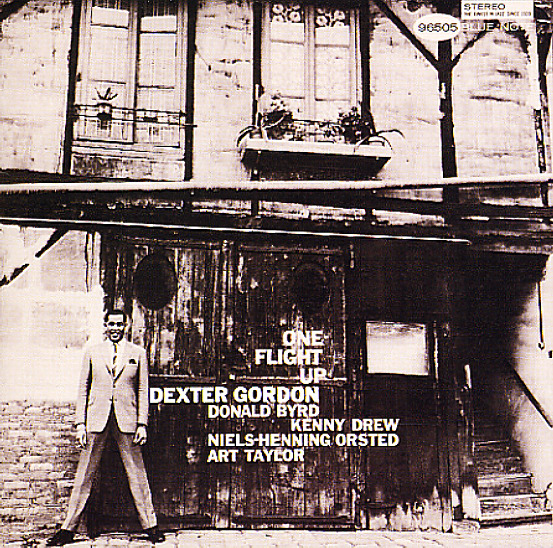 One Flight Up (RVG remaster edition)

An unusual set for both Dexter and Blue Note – first, because the set was recorded in Europe (not at Rudy Van Gelder's), and second because the tracks are all quite long! The album was recorded in Paris – and is cut in an open-ended format that's very much in the mode that Gordon would later use on late 60s and early 70s sessions for European labels. The group features (then) local contemporaries Kenny Drew on piano, and Niels Henning Orsted Pedersen on bass – and is rounded out by Donald Byrd on trumpet and Art Taylor on drums. Tracks are long, but not meanderingly so – and feature a great mix of Blue Note hardbop, with some of the "roomier" recordings that were given to American players in Europe. Side one features an extended reading of Donald Byrd's "Tanya", and other tracks include Kenny Drew's "Coppin' The Haven", and a version of "Darn That Dream" – plus the non-LP bonus track "Kong Neptune"!  © 1996-2023, Dusty Groove, Inc.
(2004 RVG pressing,)

Body & Soul
Black Lion, 1967. Used
CD...$4.99
Features Kenny Drew on piano, Niels Henning Orsted Pederson on bass, and Albert Heath on drums. Tracks include "Like Someone In Love", "Come Rain Or Come Shine", "There Will Never Be Another You", and "Blues Walk". CD