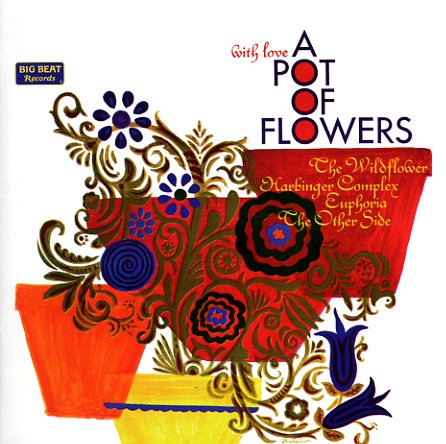 With Love – A Pot Of Flowers (plus bonus tracks)

A sweet sampling of late 60s psyche from the American underground – a collection of work by different groups who represent some of the most obscure artists on the Mainstream label at the time – fleshed out here with a slew of bonus tracks that more than doubles the running time of the original album! The work here is all generally pretty hard rocking – heavy on guitars, with lots of fuzz – sometimes in support of sweeter-styled lyrics and a dreamier, more melodic feel, other times set to darker and more hallucinatory themes. The 12 original album tracks include "Hungry Women" and "No Me Tomorrow" by Euphoria, "Wind Dream" and "Baby Dear" by The Wildflower, "My Dear & Kind Sir" and "I Think I'm Down" by The Harbinger Complex, and "Walking Down The Road" and "Streetcar" by The Other Side. There's a stunning 13 bonus tracks (!!!) – mono single versions of Wild Flower, Otherside, Euphoria and Harbinger Complex tracks and mid 60s cuts by alternate Mainstream & Brent combos The New Dawn, The Word, The Ban, Thee Unusuals and The Ariel! Includes "Slave Of Desire" by New Dawn, "Now It's Over" and "So Little Time" by The Word, "Place Of Sin" by The Word, "I Could Go On" by Thee Unusuals and more. Includes a 24-page booklet with group histories and other notes. Killer!  © 1996-2021, Dusty Groove, Inc.