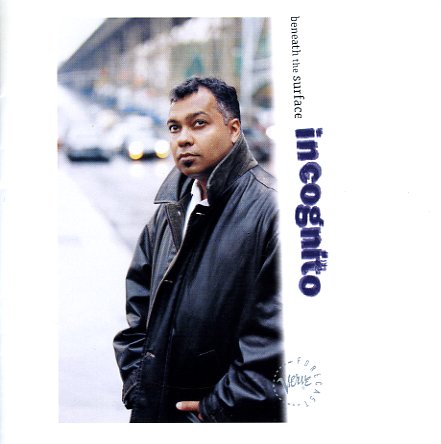 A tightly woven batch of jazzy soul tracks – the usual from Bluey and Incognito, classier than most soul you'll find on the market today, and with a depth that gives the work a distinctly classic sound! Titles include "Dark Side of The Cog", "Out Of The Storm", "Living Against The River", "She Wears Black", "Solar Fire", "Labor Of Love", "Hold On To Me", and "Without You".  © 1996-2023, Dusty Groove, Inc.
(Out of print, BMG music club pressing.)

Tales From The Beach
Dome/Heads Up, 2008. Used
CD...$6.99
No beach music grooves here – just sublimely soulful work from Incognito – played with the sort of perfection we've come to expect in their albums! The title's a tribute to the sunny grooves heard by Bluey in his youth in Mauritius, and the album was recorded with a similarly warm feel ... CD

Orchard
Verve, 2008. Used
CD...$5.99
One of the most deeply soulful sets we've ever heard from singer Lizz Wright – a record that has an even more acoustic feel than before, which really opens up the sound nicely! Given the depth of Wright's vocals, this shift is a really great move – one that lets her really stand out ... CD

Soul Providence
Dome (UK), 2005. Used
CD...$7.99
Incredible work from one of the greatest living soul singers – the best album in years from Carleen Anderson, and a record that really lives up to the promise that gripped us when we first heard her with the Young Disciples! Anderson's the daughter of James Brown diva Vicki Anderson – ... CD

Zo Presents Re:Definition
Chapter 3hree Verse 5ive Music, 2005. Used
CD...$12.99
Detroit keyboardist Zo plays with a host of great recent cuts – re:defining them with his own mellow groove by adding in a lot of sweet keyboards and spacey beats! The style's vaguely like a mix, but most tracks stand alone by themselves – keeping the original vocals and structure ... CD

Still
Conyadosssongs, 2008. Used
CD...$6.99
Conya Doss delivers some of the best and brightest underground soul – and this set is just as beautiful as her earlier work – and perhaps her best to date! Conya has been bubbling just under the mainstream radar for far too long now, with roots in the Cleveland scene but with a soaring ... CD

California
Ramjac (Sweden), 2008. Used
CD...$4.99
Natalie hails from Sweden – despite the California title of the set – but her music has a sweet, soulful sparkle that would be right at home in the US! The record's got a bit of the feel of some of the more cosmic soul coming out of the west coast underground – never too tripped-o ... CD

Soul Organic
Dome (UK), 2000. Used
CD...$6.99
A flagship record from the wonderful Dome label – one of the hippest homes to contemporary soul on the other side of the Atlantic – and a company that's given us great music for over two decades! This set is one of their key early releases – a brilliant set from Hil St Soul ... CD