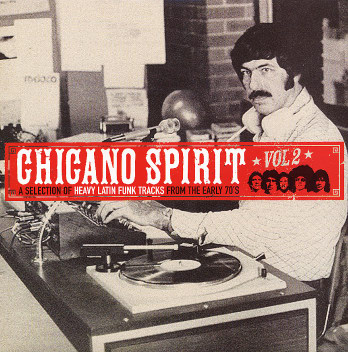 Funky Latin – like you've never heard it before! The set's a wonderful selection of rare jammers that you probably don't have in your collection – killer tunes from early 70s albums and singles, all of which have a heck of a lot of bass, really heavy drums, and a hard jamming sound that's definitely in the Chicano Spirit! Think of this work as post-Latin Soul – the sound influenced by the west coast scene of the early 70s, a sweet blend of Latin rhythms, heavy jamming, and soulful funky instrumentation. Titles include "Cumbia" by Columna De Fuego, "Funky Folsom" by Jose Chepito Areas, "Mana" by Kalapana, "Baila Chiquiban" by Nico Gomez, "Bailando Despacito" by Katunga, "Hey Girl" by Benitez, "Number One" by Messengers, "Mambo Rock" by Seguida, and the rare single "A Koko" by Willie Bobo! CD features 2 bonus tracks.  © 1996-2021, Dusty Groove, Inc.
(Out of print.)