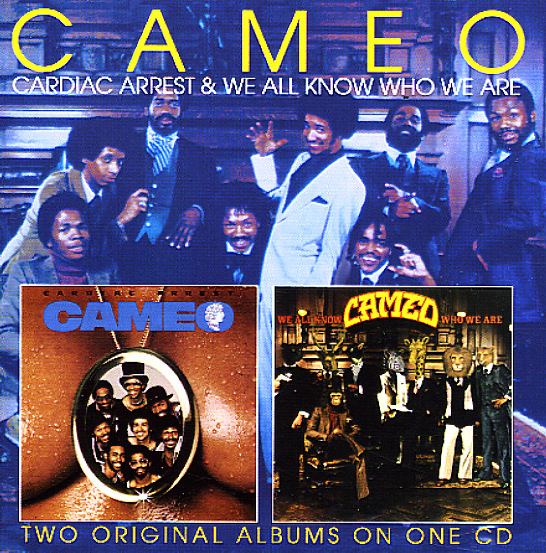 Cardiac Arrest/We All Know Who We Are

Two great albums from Cameo – back to back in a single get! Cardiac Arrest is early Cameo at their best – tight, funky, and totally out of sight! The groove here is very different than their 80s work – and the group have this amazing way of focusing all their energy down on the rhythm together, and snapping things along with a really unique approach to funk – one that draws heavily from the bass, but which also isn't nearly the same sort of bass-heavy sound that so many other copycat groups would go for in later years! The album's filled with gems – and includes the classic sample cuts "Rigor Mortis" and "Post Mortem" – plus the killers "Funk Funk", "Find My Way", and "Good Times". Easily one of their best-ever records – and for good reason too! We All Know Who We Are is one of our favorite Cameo albums of all time – a record that still has the group sounding plenty funky, but also maybe hitting a more sophisticated one – one that comes through perfectly on the message-oriented title track! There's a sense of compression going on here – everything right on the money, blending together perfectly – like Earth Wind & Fire at their classic mid-70s best – a mode that makes Cameo way more than just another funk ensemble on a major label! We're always completely in love with the smooth stepping title cut – "We All Know Who We Are" – a wonderfully catchy number that's also got a really righteous message, and kind of a "Damn Right I Am Somebody" intro, with the band rapping to each other before the song starts – and other tracks include "It's Serious", "Inflation", "It's Over", "Why Have I Lost You", and "Stand Up".  © 1996-2021, Dusty Groove, Inc.