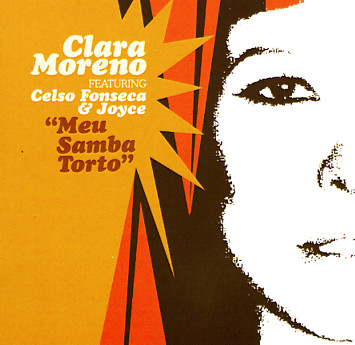 Clara Moreno's working here with some famous help in the credits – but the sound of the album is definitely all her own, and even better than some of her other great sets in recent years! The style is mostly bossa, but served up with a slightly modern approach – not one that's electrified or remixed, but nicely free of cliches that try to hard to conjure up images from the old days – done in a sparely evocative mode that really gets to the best heart of the bossa, and re-presents it wonderfully with Clara's youthful talents! Moreno's on vocals throughout – although Celso Fonseca sings a bit on a few duets – and instrumentation includes acoustic guitar from both Fonseca and Joyce on some tracks, plus drums by Tutty Moreno. Most instrumentation is acoustic, and quite stripped down – sometimes only a bit of guitar, bass, and percussion behind the vocals – giving Clara plenty of room to stand on her own, center stage. Titles include "Rosa De Ouro", "Litoranea", "Sabe Quem", "Sei La", "Moca Flor", "Mon Manege A Moi", "Tenderly", "Ela Vai Pro Mar", "Vem Morena Vem", and "Copacabana".  © 1996-2022, Dusty Groove, Inc.
(Includes slipcase.)

Africa Brazil
Far Out (UK), 2000. Used
CD...$7.99
Possibly the best album ever by this excellent Brazilian percussive combo! The record begins the groove where the group's other albums started – by taking hard batucada rhythms, and tight samba grooves – but it also adds in a bit tighter production, and shows a marked commitment to ... CD

Escape
Far Out (UK), 2001. Used
CD...$11.99
Fantastic new work from Marcos Valle – his best in years! The record has Marcos working in a sweet jazzy mode, with perhaps a bit less of the mania of earlier recordings, but no less soul. His voice has a wonderful quality on this one, slightly raspy, showing a bit of the hardship Marcos ... CD

Nova Bossa Nova
Natasha Imports/Far Out (Brazil), 1998. Used
CD...$6.99 8.99
The first album by Marcos Valle after years and years away from the studio – a set that really reintroduced his talents to a whole new generation! The set was recorded for the Far Out label in London – a then-new imprint who were doing a great job to bring back a Brazilian groove that ... CD

Carnival
Far Out (UK), 1996. Used
CD...$19.99
Surprisingly great recording by this legendary Brazilian fusion group. Surprising because it's so good, and waaay better than anything they've done in the past 10 or 15 years. The sound is nice and stripped down, and resembles their good early work much more than it does their more recent stuff. ... CD

Aventura
Far Out (UK), 2009. Used
CD...$4.99 6.99
A different groove than usual for Jose Roberto Bertrami – and a record that definitely lives up to the promise of its title! Bertrami's really broken free from the regular Azymuth groove on this set – much more so than on some of his recent solo albums – playing here with a vibe ... CD

Partido Novo
Far Out (UK), 2002. Used
CD...$6.99 11.99
Warm, wonderful, and incredibly far-reaching in scope – possibly the most ambitious record cut by Azymuth in recent years – a perfect blend of jazzy fusion, Brazilian rhythms, and some of the London broken beat culture that the group have come into contact with through their label, Far ... CD