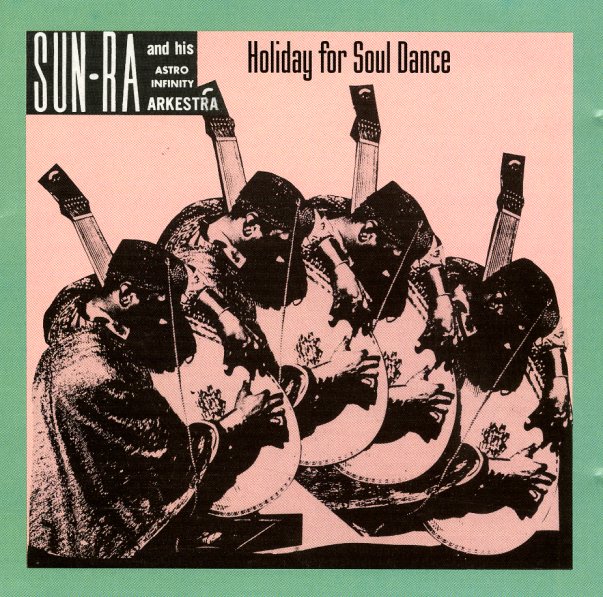 One of the more obscure albums by Ra – but a great one, and a record that features a number of tracks recorded in the same marathon session that also yielded the albums Fate In a Pleasant Mood, Angels & Demons At Play, and We Travel The Spaceways. The record, like the albums mentioned above, is a beautiful assortment of jazz standards, redone the "Ra" way, with that late 50s exotic and haunting approach to modern jazz. One of the highlights of the session is an excellent take on "Holiday For Strings", and other cuts include "Body & Soul", "But Not For Me", and "Early Autumn".  © 1996-2021, Dusty Groove, Inc.

Nothing Is
ESP/ZYX (Germany), 1966. Used
CD...$6.99
One of the best non-Saturn Sun Ra albums of the 60s – material recorded live on a tour of New York colleges in 1966, and very much in a spirit that captures the Arkestra at their best! Longer tracks are juxtaposed nicely with shorter ones – in a way that has the group running very ... CD

Greatest Hits – Easy Listening For Intergalactic Travel
Evidence, 1960s/1970s. Used
CD...$9.99
It's hard to conceive of the idea of a "greatest hits" for Sun Ra – as none of his records even cracked the charts – but this set is a much-needed one that offers a strong sampling of Ra's rich body of work, summed up nicely by 18 tracks that over a keen picture of his unique ... CD

Pathways To Unknown Worlds/Friendly Love
Saturn/Evidence, 1973. Used
CD...$9.99
Two rare albums recorded in 1973 – one previously issued, one appearing here for the first time! Pathways To Unknown Worlds has the group playing a host of odd instruments – including space dimension mellophone, ancient Egyptian Infinity Drum, vibes, and moog – as well as the ... CD

Standards (24 bit remaster)
1201 Music, Early 60s. Used
CD...$6.99
A really unusual setting for Sun Ra – given that the legendary jazz figure is working here on a host of American songbook standards – and not the cosmic tunes of his own creation! And yes, as you might guess, there's an offbeat feel to almost all the performances here – which ... CD

Purple Night
A&M, 1990. Used
CD...$12.99
Sun Ra finally makes it onto a major label, not too long before he departed our planet! The well-produced set features work from John Gilmore on tenor, Marshall Allen on alto, Julian Priester on trombone, and Don Cherry on pocket trumpet – and Ra plays piano and synthesizer! CD

Strange Celestial Road xc
Celestial/Rounder, 1980. Used
CD...$13.99
A very nice session that actually has a bit of a soul jazz touch – with elements that are similar to Ra's Lanquidity set, a much sought-after spacey fusion classic! The band still plays fairly out, but the singing's a bit more soulful than usual, and the music has some funky vibes, guitar, ... CD

Super-Sonic Jazz
Saturn/Evidence, 1956. Used
CD...$7.99
The first album on Saturn! Despite the futurism that the title of the set might imply, the material on this LP is actually some of Sun Ra's earliest, and dates back to the years when the Arkestra was first beginning to make itself heard in Chicago. That doesn't stop the material from being ... CD

Reflections In Blue
Black Saint (Italy), 1987. Used
CD...$9.99
A later classic from Sun Ra – a record that brought his music to a much wider audience in the 80s, and which bears one of his most beautiful cover shots ever! The record's got a wonderfully tight feel – a sound that's often not as out as Saturn sides, and which shows Ra's ability to ... CD

Monorails & Satellites
Saturn/Evidence, 1966. Used
CD...$6.99
A groundbreaking album of solo piano work by Sun Ra! The album's one of Ra's classic sides for the Saturn Records label – and at the time of its release, it was one of the most "out there" albums of solo piano ever recorded! Ra spins out these incredibly complex lines on haunting ... CD

Shukuru
Theresa/Evidence, 1985. Used
CD...$9.99
A great album by Pharoah Sanders – recorded in the mid 80s, but with a spiritual style that's kind of a bridge between Pharoah's earlier days and the present. The work is played by a small group that includes Idris Muhammad on drums, William Henderson on keyboards, and Ray Drummand on bass. ... CD

Jazz Nocturne
Evidence, 1994. Used
CD...$7.99
A great straight set from the later years of Lee Konitz – one that has the altoist swinging wonderfully in the company of pianist Kenny Barron! There's a soulful undercurrent to the record that really shows Barron's hand in the sound of the session – that mature groove that Kenny ... CD