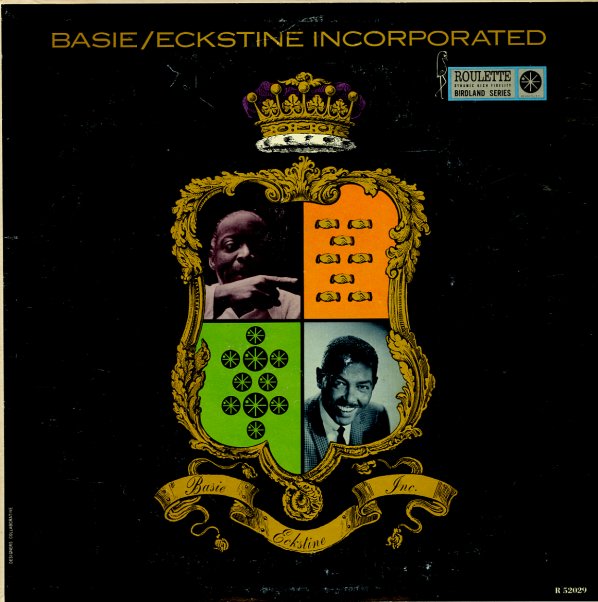 Basie One More Time
Roulette, Early 60s. Very Good+
LP...$16.99
The genius of Basie meets the genius of Quincy Jones – a 60s pairing that's every bit as great as the 50s pairing of Basie and Neal Hefti! Jones and Basie worked together in a number of settings during the 60s – including a very successful album for Frank Sinatra on Reprise – but ... LP, Vinyl record album

Count Basie & Sarah Vaughan
Roulette, 1960. Very Good
LP...$4.99 (CD...$4.99)
Sarah Vaughan gets some backing from Count Basie – making for a record that's one of her jazziest and swinging of the time! As with other Basie-related vocal sessions from the early 60s, this one has a soulful edge and a nice little bounce – one that makes for a more solid approach ... LP, Vinyl record album

School Of Rebellion
Roulette, 1958. Near Mint-
LP...$19.99
This ex-Kentonite leads a group of modernists (Frank Socolow, Don Sebesky, Bill Elton) through a suite of his excellent original compositions, including "An Esthete on Clark Street", "Pickwick", and "The Golden Apple", plus a reading of "Manteca" that's ... LP, Vinyl record album

Life Is A Many Splendored Gig
Roulette, 1958. Very Good+
LP...$14.99
Incredibly hip big band work from trumpeter Herb Pomeroy – proof that the Boston influence in the 50s was a very good force in modern jazz! The group here is large, but the sound is often quite lean – done with an open focus on the strongest soloists in the group – players who ... LP, Vinyl record album

Music To Stop Smoking By
Roulette, 1963. Sealed
LP...$29.99
Well, this one's not really the kind of album that will make you throw away your Marlboros – but it is a great set of jazz tracks by Sal Salvador, despite a goofy cover and title! The album was issued by Roulette during the time of its "how to strip" and "how to ... LP, Vinyl record album