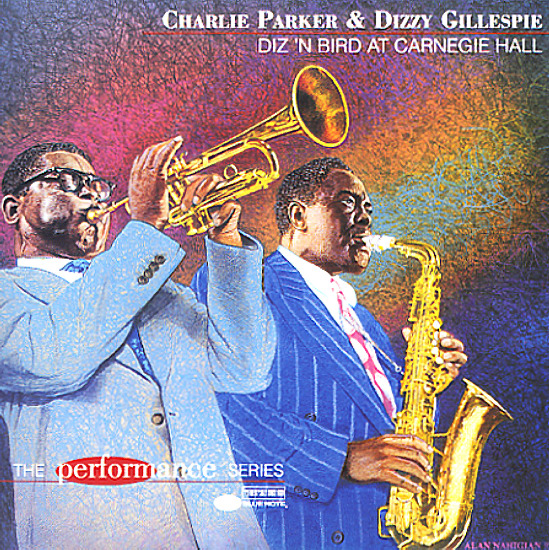 A Carnegie Hall date that starts with a quintet set and and expands into a big band peformance. Players include John Lewis on piano, James Moody on tenor sax, Cecil Payne on baritone sax, Milt Jackson on vibes, Chano Pozo on congas, and Al McKibbon on drums.  © 1996-2021, Dusty Groove, Inc.

Intuition
Capitol, Late 40s/1956. Used
CD...$9.99
Classic modernist jazz from the 50s, long out of print in the US, and issued here in a beautiful CD that includes a huge amount of tracks and good notes on the material! Half of the CD is a reissue of Warne Marsh's rare Jazz Of Two Cities album, a killer two-tenor workout with an icy cool feel, ... CD

Sophisticated Approach (plus bonus tracks)
Capitol, 1961. Used
CD...$7.99
A great set by Stan Kenton – one that applies the dark tones of his style to a range of popular numbers that end up completely transformed! The album features some wonderful charts from arranger Lennie Niehaus – emerging here as one of the more complicated talents of the west coast ... CD

Contemporary Concepts (plus bonus tracks)
Capitol, 1955. Used
CD...$7.99
Contemporary concepts that are as bold today as they were when first released in the mid 50s! Stan's at the height of his powers here – working with the brilliant Bill Holman to craft some incredible versions of tunes that had become jazz standards, tired ones at that – but which ... CD

Moment Of Truth
Pacific Jazz/Capitol, 1963. Used
CD...$14.99
One of the classic big band sessions cut for Pacific Jazz by LA soul jazz arranger Gerald Wilson. Nearly every track's an original, and the album includes Wilson's killer track "Viva Tirado" – a tight jazzy stepper that was covered by loads of other artists, most famously El ... CD