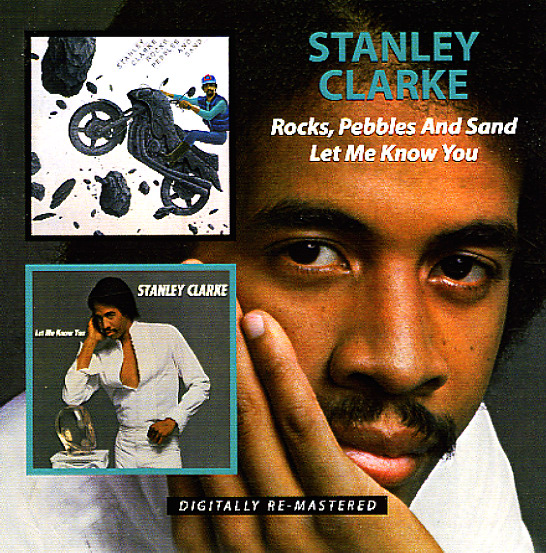 Rocks Pebbles & Sand/Let Me Know You

Funky fusion galore – two Stanley Clarke albums on a single CD! Rocks Pebbles & Sand is killer work from Stanley – a set to start off the 80s, but still very much in that unique blend of jazz, rock, and soul he forged so well in the 70s! The set begins with really heavy drums and bass – nicely propelled, but never too strong or too jamming – a great balance that really sets the pace well for the record as Clarke and the combo pulsate through a range of nice little numbers – often linked with a cool motorcycle sound effect! There's a few 80s touches, mostly in the keyboards, but these are never too modern – and all used very nicely. Titles include the extended "Story Of A Man & A Woman" suite – plus "Danger Street", "All Hell Broke Loose", "Rocks Pebbles & Sand", and "Underestimation". On Let Me Know You, Stanley Clarke's a lot more soul-based than fusion – but that's A-OK with us, because we like this sort of work a lot better than his jamming jazz rock of the 70s! The record's got a great mellow soul vibe – laidback and gently stepping – sometimes in a way that's a bit commercial, but never with as many of the cloying styles as hurt other records like this at the time. Stan sings, plays bass and guitar, and other players include Greg Phillinganes on Fender Rhodes and mini-moog, Ndugu Chancler on drums, Michael Sembello on guitar, and Paulinho Da Costa on percussion. Titles include "Straight To The Top", "Let Me Know You", "You Are The One For Me", "Play The Bass", "New York City", and "Secret To My Heart".  © 1996-2021, Dusty Groove, Inc.

Miles Smiles
Columbia, 1966. New Copy
CD...$4.99 6.98 (LP...$19.99)
Miles Smiles, but his grin is a wry one – given the angular energy of the set! The album's a landmark effort from the mid 60s quintet that includes Wayne Shorter, Herbie Hancock, Ron Carter, and Tony Williams – all of whom work without fail to capture Davis' newly emerging approach to ... CD