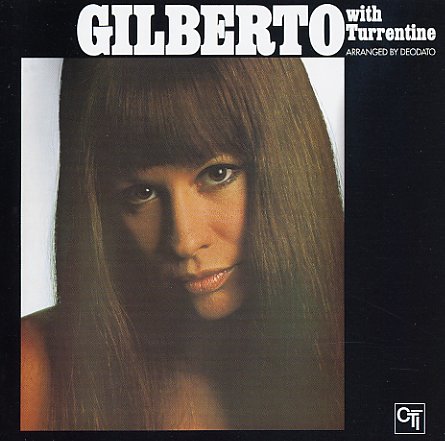 Incredible 70s work from the lovely Astrud Gilberto – a rare effort for the CTI label that has her teaming up with arranger Eumir Deodato and saxophonist Stanley Turrentine – all in a groove that's totally different than most of her earlier work! Astrud's breathy vocals are still wonderfully intact – but they're given a more spacious approach in the arrangements – strings mixes with rolling basslines, soaring keyboards, and stone cold tenor from Stanley – in a groove that's simply wonderful, and which takes off in a whole new direction than before! Other players include Airto, Sivuca, Hubert Laws, and Dom Um Romao – and tracks include classic versions of "Ponteio", "Vera Cruz", and "Zazueira" that are all some of the most grooving takes on the tunes ever – plus "Historia De Amor", "Where There's A Heartache", "Brazilian Tapestry", and "Wanting Things".  © 1996-2022, Dusty Groove, Inc.
(Out of print.)

Antonio Brasileiro Jobim
Globo/Columbia (Brazil), Early 90s. Used
CD...$9.99 (CD...$19.99)
Later work from bossa legend Antonio Carlos Jobim – and a set that shows just how creative his talents could grow over the years! Jobim was never stuck in the simple trappings of the generation from which he emerged, and could instead find ways to bring the airy brilliance of his style into ... CD

Solitude On Guitar (Brazilian pressing)
Columbia/MPS (Brazil), 1973. Used
CD...$9.99 12.99
Beautifully spare work from guitarist Baden Powell – and a record that certainly lives up to its title! Baden's playing in a mostly unaccompanied setting for the session – working through some tunes that are markedly gentler than his bossa era numbers, but which demonstrate an amazing ... CD