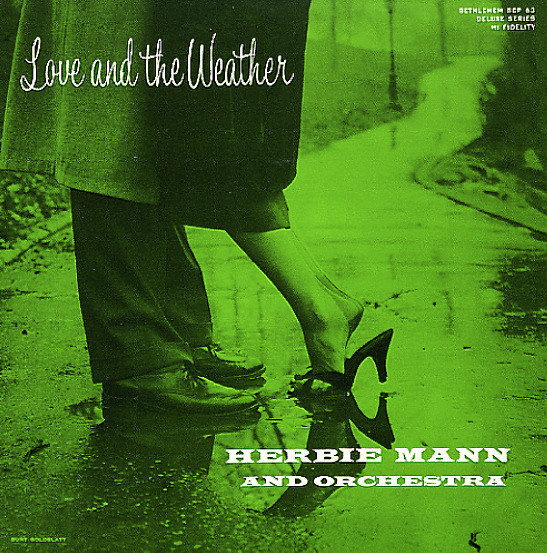 Fantastic stuff all around – and an early treasure from Herbie Mann! From the outside, the record appears to be a mellow album of easy listening tunes – but on the inside, it's a darkly tuned session – one that's filled with sorrow and haunting emotions that you'd never find in any other Herbie Mann album! Herbie's the main soloist – playing flute in front of orchestrations by Ralph Burns and Frank Hunter, both of whom do an incredible job with the record – filling it with strange off-kilter string parts that totally underpin any of the mellow side of Herbie's playing. Burns' work is especially great, and rivals some of his best material of this sort for Verve. Titles include "Love & The Weather", "Ill Wind", "Moon Love", "High On A Windy Hill", and "The Morning Side Of The Mountain".  © 1996-2022, Dusty Groove, Inc.
(Mono red label pressing with deep groove. Cover has wear and aging, split seams with reinforced tape remnants, and a clipped corner in back.)

Herbie Mann In Sweden (aka Mann In The Morning)
Prestige, 1957. Near Mint-
LP...$11.99 16.99
Different work than usual for Herbie – a series of sides recorded in Sweden in the late 50s, featuring Herbie on both flute and tenor! The feel here is at once more poised and more open than some of Herbie's US sides from the time – as the groups shift from track to track, and Herbie's ... LP, Vinyl record album

Herbie Mann At The Village Gate
Atlantic, 1962. Near Mint-
LP...$14.99 24.99
Herbie Mann's at the Village Gate – really wailing away in a set of extended numbers that not only set a whole new standard for live recording in jazz, but which also pushed forward the role of the flute in the music as well! There's a heck of a lot of soul in the grooves here – served ... LP, Vinyl record album

Bethlehem Years (aka Daddy Plays The Horn)
Bethlehem, 1955. Near Mint-
LP...$9.99
One of Dexter Gordon's proudest moments of the 50s – a rock-solid session for Bethlehem – easily one of the best-remembered hardbop sides from the label's California years! The album's got a relaxed, free-blown sound that's quite nice – with Dex in the lead on tenor, supported by ... LP, Vinyl record album

Swinging Introduction To Jimmy Knepper
Bethlehem, 1957. Near Mint-
LP...$23.99
Great work from one of the most compelling trombonists of the 50s! Jimmy Knepper is probably best known for his excellent work on some of Charles Mingus' best records – but this set from 1957 shows that Knepper was also an extremely capable (if under-recorded) leader in his own right! The ... LP, Vinyl record album

Thinking Man's Music (aka Ralph Sharon Trio)
Bethlehem, 1956. Near Mint-
LP...$24.99
One of the few albums as a leader cut by pianist Ralph Sharon – a player who's best known for his years supporting singer Tony Bennett, but who sounds really wonderful here in an instrumental setting too! Sharon's got a way of coming up both with a punch and a fluid sort of groove – ... LP, Vinyl record album

Down Home
Bethlehem, 1960. Near Mint-
LP...$34.99
A really great little set from Zoot Sims – earthy, and almost a bit more fragile than much of his other work! There's a real "down home" feel to the whole record – as Zoot blows comfortably and easily in a quartet with Dave McKenna on piano, George Tucker on bass, and Dannie ... LP, Vinyl record album

Idol Of The Flies (aka Swinging Introduction To Jimmy Knepper)
Bethlehem, 1957. Near Mint-
LP...$9.99
Great work from one of the most compelling trombonists of the 50s! Jimmy Knepper is probably best known for his excellent work on some of Charles Mingus' best records – but this set from 1957 shows that Knepper was also an extremely capable (if under-recorded) leader in his own right! The ... LP, Vinyl record album