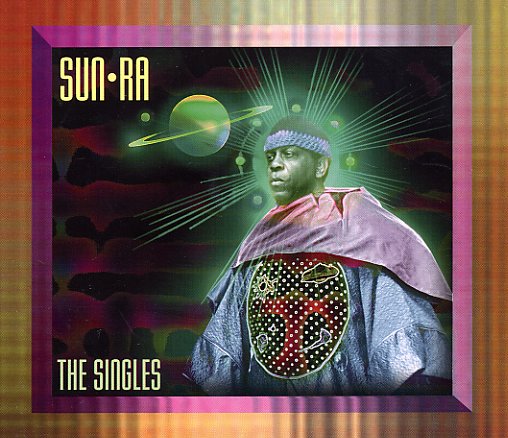 A totally essential 2 CD set that brings together a huge amount of singles that were recorded by Sun Ra and others for his legendary Saturn label! As you probably know, the albums that were recorded for Saturn were rare enough – but the singles on the label were even rarer, and some of them were pressed in batches as small as 75 copies! The material is a very strange mix of jazz, soul, doo wop, and R&B – but it's all got the off-kilter Sun Ra twist to it, and the music is a key slice in the independent history of underground jazz pioneered by Ra & The Arkestra. You'll hear plenty of stuff by Ra (including the legendary "I'm Gonna Unmask The Batman") – and you'll also get stuff by Lacy Gibson, The Cosmic Rays, The Nu Sounds, Yochannan, and The Qualities. Annotated with 36 pages of detailed notes, written by 4 different Ra experts – and a treat for collectors and novices alike!  © 1996-2022, Dusty Groove, Inc.

Cymbals/Symbols Sessions – New York City 1973 (2018 Record Store Day Release)
Modern Harmonic, 1973. Used 2 CDs
CD...$24.99
A lost slice of work from Sun Ra's early 70s years on Impulse Records – one of the few new recordings created for his association with that label (most of the titles were reissues of earlier Saturn albums) – but one that was never issued at the time! Cymbals saw some release later, ... CD

Left Alone '86
Evidence, 1986. Used
CD...$8.99
Not a duet session as you might guess from the title – as the piano of Mal Waldron and alto of Jackie McLean are joined by the bass of Herbie Lewis and drums of Eddie Moore! Titles include "Lover Man", "Minor Pulsation", "Left Alone", "Cat Walk", and ... CD

Somalia
Evidence, 1995. Used
CD...$11.99
Great recent work from tenor giant Billy Harper! After his classic sides in the 70s, we didn't hear from Harper for years as a leader, but when this one came out, it was well worth the wait! The album's a beautiful batch of tracks in Harper's unique style of soulful avant blowing, and the players ... CD

True Or False
Evidence, 1986. Used
CD...$9.99
Crackling tight work from Roy Haynes – recorded here in a live setting with his mid 80s group that featured the great Ralph Moore on tenor. Moore's angular lines dominate the set – a bit freer than on the albums cut under his own name, driven onward by the drumming of Haynes, into a ... CD