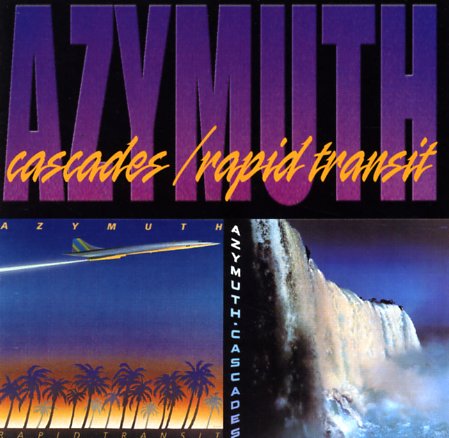 Sublimely soulful work from Azymuth – 2 albums back to back on a single CD! Cascades is fantastic fusion from a group who just couldn't miss during these early 80s California years! The sound here is smooth, but never slick – always a little offbeat, and quite different from more mainstream US fusion of the time – thanks to the genius of Jose Roberto Bertrami's keyboards, which glide one moment, dip the next, and often have these slight changes in speed that are totally great. Other members of the core trio include Alex Malheiros on bass and guitar and Ivan Conti on drums and percussion – and the set also features guest work by Mauricio Einhorn on harmonica, Jose Carlos on flute, and Sidney Moreira on percussion. Titles include "Remembering Milton", "Club Morocco", "Through The Window", "Festa Nativa", "Cascade Of The Seven Waterfalls", and "Indian Pepper". Rapid Transit is a set with a really warm groove overall – hardly the too-fast, or too-urban record you might expect from the title! Instead, there's a nicely organic sensibility going on here – a sound that feels fresh and spontaneous, even when it's in the highly electric territory of Jose Roberto Bertami's keyboards. There's a slight bit of added flute and percussion on the set, but most of the sounds here are from the core Azymuth trio – who even vocalize wordlessly on one of the album's best tracks. Titles include "Missing Doto", "Make Mine Guarana", "Gate Of Time", "I'm Just Looking Around", "Somewhere In Brazil", and "Afternoon".  © 1996-2022, Dusty Groove, Inc.