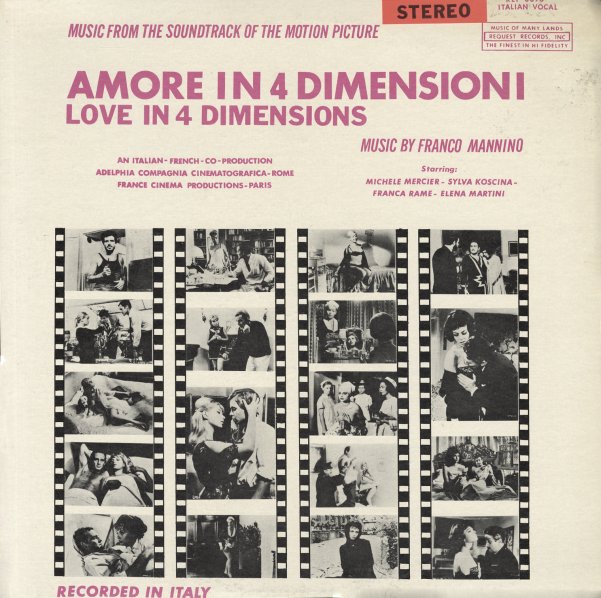 A very cool little album – the US issue of soundtrack material penned by Franco Mannino for this 4-part Italian sex comedy film, sort of a series of shorter vignettes. The album really captures the spirit of the film, mixing together snippets of dialogue with music, themes running through styles that include light lively bossa-esque, jazzy, and Nino Rota styled tunes. Tracks include "Theme Of Tears", "Again The Cemetery", "Love & Art", "Theme From Love & Death", "Husband & Maid", "Teaching Scene & Love Scene", and "Night In The Garage".  © 1996-2022, Dusty Groove, Inc.
(Black label stereo pressing. Cover has some aging and a Stereo sticker.)

Koyaanisqatsi
Antilles, 1983. Near Mint-
LP...$49.99
One of the first film scores ever done by Philip Glass – and a sublime batch of music that exposed his genius to a whole world who'd never heard him before! The music builds in a beautifully minimal way – with rumbling organ and orchestral themes at the beginning, which slowly evolve ... LP, Vinyl record album

Chariots Of Fire
Polydor, 1981. Near Mint-
LP...$3.99
A big moment of fame for a guy who started out in Aphrodite's Child! Great sounds for running on the beach – and side two features the long "Chariots Of Fire" theme! LP, Vinyl record album