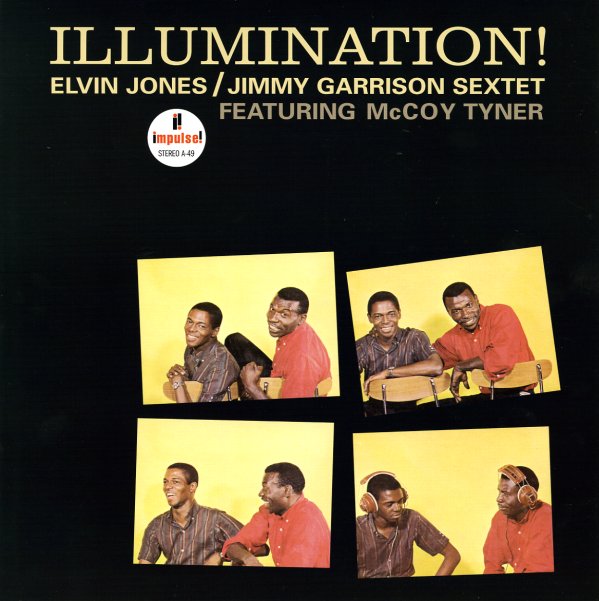 An amazingly unique little group – one that kind of stepped in the Impulse Records back door from the Coltrane galaxy, but which features some very unique aspects overall! As the cover states, the ensemble's led by bassist Jimmy Garrison and drummer Elvin Jones – and also features McCoy Tyner from Coltrane's quartet – yet the real charm of the record comes from the reed men, who include Prince Lasha on flute and clarinet, Sonny Simmons on alto and English horn, and Charles Davis on baritone sax! All players are free-thinking modernists, with ties to some of the farther reaches of 60s jazz – yet they work here in a beautifully inside mode, similar to Lasha's excellent Insight album on CBS UK – a vibe that takes all the most wonderful aspects of the Coltrane generation, but pushes them even further with some deeply personal expressions. Tracks include the seminal "Half & Half" – plus "Aborigine Dance In Scotland", "Oriental Flower", and "Nuttin Out Jones", and "Gettin On Way".  © 1996-2022, Dusty Groove, Inc.
(Digipack has a clear promo sticker and a mark through the barcode.)

Awakening
Impulse/MCA, 1970. Used
CD...$9.99
A mindblowing album from Ahmad Jamal – a fantastic start to the 70s, and a set of music that shows just how far the pianist had come in just a few short years! The album's all acoustic, but has some of that spacious flow that Jamal would bring to his work on Fender Rhodes – with an ... CD

Duke Ellington & John Coltrane
Impulse, 1962. Used
CD...$2.99 (LP...$29.99)
A seminal meeting of the old and new generations of jazz – put together in perfect Impulse fashion! At some level, this is actually a Coltrane Quartet album, with Duke sitting in for McCoy Tyner – as that's the lineup on about half of the album, tracks that feature Coltrane, Elvin ... CD