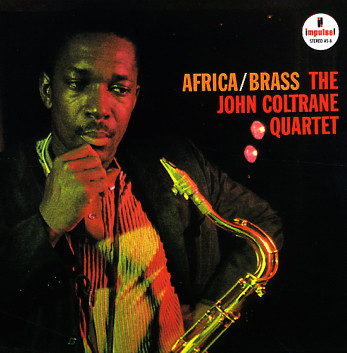 Very unusual work by Coltrane – sessions that feature his classic quartet playing in front of larger orchestra backings conducted by Eric Dolphy! The tracks feature Trane leading a group young modernists through a set of larger arranged charts, woven tightly together in a soulful spiritual groove that's similar to some of Max Roach's projects like this from the same time. Players include Booker Little, Eric Dolphy, McCoy Tyner, Elvin Jones, Reggie Workman, and Julius Watkins – and this 2CD set features all of the material that was issued on the first album, plus other tracks that came out during the 70s. There's a total of 8 cuts in all – and titles include "Song Of The Underground Railroad", "Blues Minor", "Africa", "The Damned Don't Cry", and "Greensleeves".  © 1996-2022, Dusty Groove, Inc.
(Out of print, digipack case has light edgewear.)