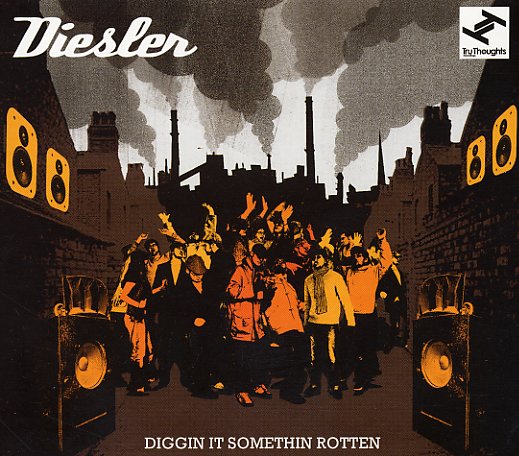 A far-reaching selection of styles from Diesler – a one man operation that spins enough sweet, beat heavy mastery to outpace a lot of full blown collectives! Diesler first came to our attention with his contribution to the Tru Thoughts Shapes One compilation – and he carries that vibe here, but goes a lot deeper with a full tracklist of his own! The set's a nice mixture of pulsing club beats, driving production, and lots of raw jazzy touches! Tracks include "Cotton Wool", "Downtime", "Sandcastles", "Dark Water", "High Time", "Burnley Wallet", "City Of God", Redux", "Heist Theme", and more.  © 1996-2020, Dusty Groove, Inc.

Gravity
Tru Thoughts (UK), 2006. Used
CD...$6.99
One of the most creatively compelling projects we've heard on Tru Thoughts in awhile – a great collaboration between Natural Self and Nostalgia 77, and one that brings out the funkiest sides of both artists' work! The album is heavy on older funk and soul references – mostly presented ... CD

They Shall Inherit
Tru Thoughts (UK), 2013. Used
CD...$4.99
A mindblower from Menagerie – yet another deep musical chapter in the rich career of Lance Ferguson – an artist we loved for his early club work, then dug as a funk maestro with The Bamboos, now able to hit spiritual jazz sounds with this wonderful new group! The set's got a feel that's ... CD

Super Baxophone
Tru Thoughts (UK), 2005. Used
CD...$2.99
Thumping, bumping, and jumping – an excellent set of deep funk grooves from Jumbonics, but handled with the usual Tru Thoughts twist! Jumbonics live in a space that's somewhere between instrumental funk and downtempo – using the best classic sounds of the former, but putting them ... CD