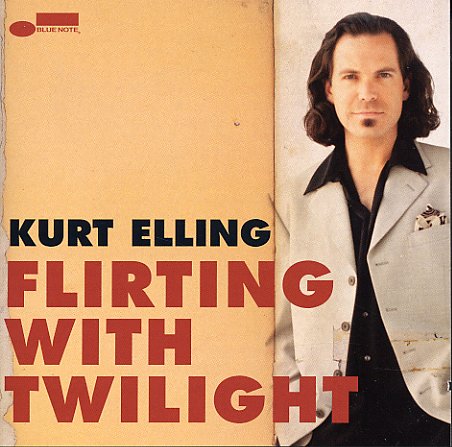 Think what you may about this groove-patched hipster – we still think he's one of the best jazz vocalists of our time! Kurt Elling's carrying a torch that few other singers could handle – a direct line back to the genius male jazz vocal work of singers like Mark Murphy and Jon Hendricks, armed with the confident emotionality and freely expressive style of the former, and the jazz-based virtuosity and sense of humor of the latter. This recent Blue Note session is very much in Elling's best mode – a bit too sweet in parts, but filled with some great numbers that show him always pushing the envelope, not content to just be a "modern classic" vocalist, as might be said for some of his female contemporaries in the jazz vocal realm. Titles include "Say It", "While You Are Mine", "I'm Thru With Love", "Orange Blossoms In Summertime", "Detour Ahead", "Lil Darlin", and "Easy Living". And sure, we wish there were more original compositions – as on other albums – but Elling really still does a great job with the standards!  © 1996-2022, Dusty Groove, Inc.
(Out of print.)

Dedicated To You – Kurt Elling Sings The Music Of Coltrane & Hartman
Concord, 2009. Used
CD...$5.99
A beautiful tribute to the historic pairing of John Coltrane and Johnny Hartman – delivered here by one of our favorite jazz singers working today! The album's way more than just a simple rehash of a classic – as Kurt Elling expands upon the Coltrane/Hartman vibe tremendously, taking ... CD

Man In The Air
Blue Note, 2003. Used
CD...$4.99
One of the best studio albums in years from Kurt Elling – the much-overlooked Blue Note vocalist who's truly one of the greatest singers of his generation! The album returns Elling to a format that we really love – a setting in which he's able to craft his own lyrics to tunes – ... CD

Liquid Spirit (bonus tracks)
Blue Note, 2013. Used
CD...$8.99
Gregory Porter arrives on Blue Note Records – and the result is Porter's most fully-formed set so far – just the kind of album that will push him firmly into the limelight – a place that we've felt he's deserved for quite a few years! Porter's a hell of a singer, and a hell of a ... CD

Blue Light 'Til Dawn
Blue Note, 1993. Used
CD...$1.99 (LP...$31.99)
A beautiful early album from Cassandra Wilson – a singer who already had a really deep sound, right at the start – and definitely hit her stride with music like this! The album mixes jazzy currents with rootsier elements – some of them from a more global perspective – and ... CD

Bossa Nova Stories
Blue Note, 2009. Used
CD...$8.99
Beautiful bossa from Eliane Elias – and a great reminder of how much we love her work in this style! The set's recorded with a warmly lyrical feel – core backing by a small combo with Oscar Castro Neves on guitar, amidst fuller strings arranged by Rob Mathes – never too lush, and ... CD

Come Away With Me
Blue Note, 2002. Used
CD...$2.99
Although we're a bit ashamed to admit this, it took us about a year and a half – waaaaaay too long, to come around on Norah Jones. Grammy Awards often bring out our inner cynic. Anyway, we get it now – and better late than never, right? Norah is probably the single best thing to have ... CD