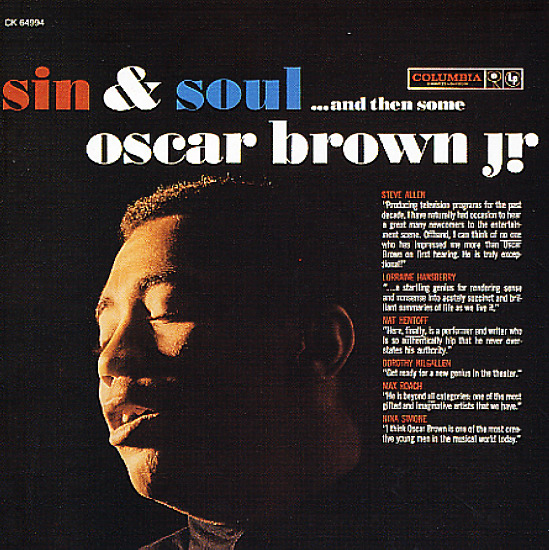 Trend-setting vocal work from Oscar Brown Jr – one of the hippest singers of his generation, and a vocalist who really took things to the next level in the 60s! Brown's got a sound that's partially influenced by the vocalese of Eddie Jefferson, Jon Hendricks, and other singers of the 50s – but his groove here is also a bit more fluid and lyrical too – thanks to some great lyrics penned by Oscar, some of which went on to become classics over the years. Like his predecessors, many of the tunes chosen by Brown got their start as jazz instrumentals, but sparkle anew here with fresh lyrics that really liven them up a lot – tales of sin and soul and a lot more, often delivered with a good sense of wit. Titles include great vocal versions of "Dat Dere", "Work Song", and "Afro-Blue", plus some of his great original compositions, like "Brown Baby", "But I Was Cool", and "Rags and Old Iron". The arrangements are great, with a nice jazzy sound – and the group includes the excellent Floyd Morris on piano! CD features 5 bonus tracks that include "Straighten Up & Fly Right", "Forbidden Fruit", "World Of Grey", "Mr Kicks", and "Hazel's Hips".  © 1996-2023, Dusty Groove, Inc.
(Out of print.)