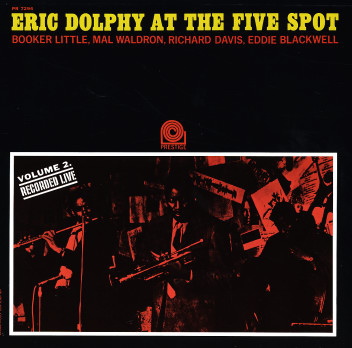 Searing live work from Eric Dolphy – part of a series of recordings that set a whole new standard for live jazz recording! The record features Dolphy going even farther out than on his studio sides from the time – as the record features very long tracks performed by a crack group that includes Booker Little on trumpet, Mal Waldron on piano, Richard Davis on bass, and Ed Blackwell on drums. Despite the length of the tracks, Dolphy isn't as far out as on later European live recordings – but the performance is a great example of his inventiveness within a mainstream structure, and the modernist tendencies of both Waldron and Little shine very brightly in the set. The concert was one of Little's last (and greatest) recordings – sometimes billed as a "memorial", even though he was still alive when it was done – and titles on this volume include "Aggression" and "Like Someone In Love".  © 1996-2021, Dusty Groove, Inc.
(Out of print.)

Complete Memorial Album Sessions (The Douglas Recordings)
Lonehill (Spain), 1963. Used
CD...$14.99
The title's possibly a bit misleading here – as the record's not so much a memorial to Dolphy, but a repackaging of sides that were repackaged originally as such in the 60s! If that's not confusing enough, let us just explain that the set features 9 tracks from Dolphy's important recordings ... CD

Last Date
Fontana, 1964. Used
CD...$9.99
A fitting title for a great album – Eric Dolphy's last live recording, performed on June 2, 1964, with a trio of youngsters that included two of the greatest names in European avant garde jazz – Misha Mengelberg and Han Bennink! The sound is jagged and a bit free – showing the ... CD

Iron Man
Douglas/Fuel 2000, 1962. Used
CD...$4.99
A seminal set from Eric Dolphy – one of his most perfectly realized moments at the head of a larger ensemble – and a record that definitely set the tone for countless spiritual jazz sessions of the 70s! Dolphy recorded this session for Alan Douglas in 1962, and it features a larger ... CD

Virtuoso #4
Pablo/OJC, 1973. Used 2 CDs
CD...$9.99
A double length collection of solo guitar tracks recorded in 1973, but not released until 1983. The format is a perfect showcase for the new sensitivity Joe Pass brought to his instrument at Pablo records and is light years away from some of the gimmicky records of a decade before – full of ... CD