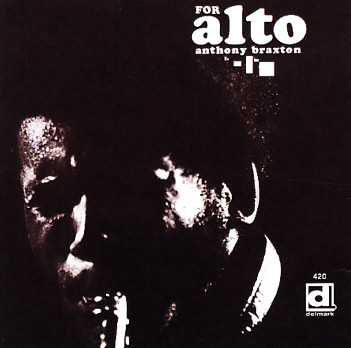 One of the first solo saxophone recordings of the 60s – recorded as one of the first few sessions by a young Anthony Braxton! As the title implies, the whole album features alto sax – played freely by Braxton with a depth of creativity and sense of humanity to rival any of the previous greatness of his generation from bigger names on labels like Impulse or ESP. There's a great sense of restraint here too – not one that has Braxton on the inside of the jazz spectrum, but which keeps him focused, and never to overly-indulgent in this new sort of setting. The sounds from his alto are clearly revolutionary – even from the perspective of many decades later – and we honestly think this record still beats most of the albums of this type that have come out in the years since it was first recorded! Tunes are all dedicated to Braxton's friends and heroes, in sort of a who's-who of the avant garde – and ttles include "To Composer John Cage", "To Leroy Jenkins", "To Murray De Pillars", and "To Pianist Cecil Taylor".  © 1996-2021, Dusty Groove, Inc.
(Out of print.)

Six Compositions 1984 (CDr pressing)
Black Saint (Italy), 1984. Used
CD...$7.99
Anthony Braxton's reeds are matched here by some wonderful piano here from Marilyn Crispell – who certainly brings lots of her own voice into play with the Braxton compositions on the set! Crispell's piano gives the album a slightly different feel than some of Anthony's other work of the ... CD