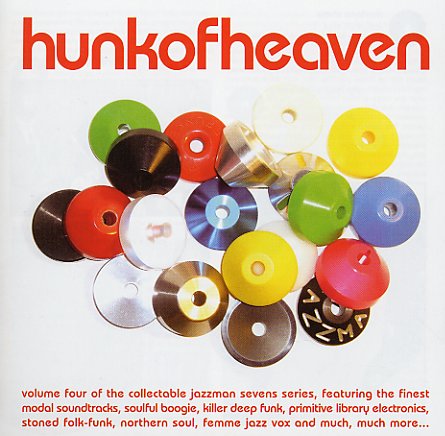 Also available
Various — Hunk Of Heaven – Volume 4 Of The Collectable Jazzman Sevens Series ... CD 6.99
Proof that there's few labels better at digging up an interesting groove than the mighty Jazzman imprint – home to a consistently great series of reissue 45s over the past 10 years or so! The Jazzman groove goes way beyond the standard deep funk line – into a realm of groovy styles that includes soundtrack bits, primitive electronics, female jazz vocals, socking 60s soul, and a whole lot more – all served up perfectly in this wonderful little set! And as with other Jazzman volumes, it's not just the music that makes the set great, but the way it's put together – as Gerald Jazzman manages to sort tunes and lay them out one by one in a style that really changes up the groove – pushing our expectations with each new number, and really keeping things fresh throughout! This one's way way way more than just a pile of rare funk tracks – a truly loving document of one label's commitment to the depth of music in all its forms – served up over a batch of 12 rare tunes! Titles include "Let's Go" by James Reese & The Progressions, "Baby True" by Gettysbyrg Address, "Hunk Of Heaven" by Lemuria, "Pretty Bird" by Terea, "Transfert 2002" by Le Groupe X, "Scherzi Pesanti" by Remigio Ducros, "One" by Mary Lou Williams, "Bobby's Mood" by Soul Toronadoes, "California Soul" by Marlena Shaw, and "Baltimore Oriole (King version)" by Lorez Alexandria.  © 1996-2023, Dusty Groove, Inc.