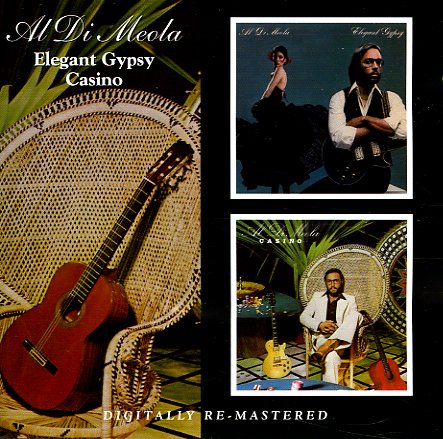 Two full fusion classics from Al Di Meola – back to back on a single CD! Elegant Gypsy really features DiMeola moving into some very dynamic territory – jamming out heavy on a mix of electric and acoustic guitars, with additional help from Paco DeLucia on acoustic at points. The instrumentation also features heavy electric piano from Jan Hammer, other keyboards from Barry Miles, bass from Anthony Jackson, and drums from Steve Gadd and Lenny White – all fusion powerhouse players who really take over the groove at times, but still leave enough room on the record for some gentler sounds from Paco and Al. Titles include "Elegant Gypsy Suite", "Flight Over Rio", "Midnight Tango", and "Race With Devil On Spanish Highway". Casino has a smaller, tighter lineup than some of Al DiMeola's other records of the time, but the overall sound is still pretty far-reaching – thanks to a mix of keyboards from Barry Miles, and a blistering array of acoustic and electric guitars from Al himself! Steve Gadd propels the group withs ome very heavy drums, and Anthony Jackson plays bass – on titles that include "Egyptian Danza", "Chasin The Voodoo", "Senor Mouse", "Casino", and "Fantasia Suite For Two Guitars".  © 1996-2022, Dusty Groove, Inc.

Sorcerer
Columbia/Legacy, 1967. New Copy
CD...$4.99 7.99 (LP...$69.99)
Another bold new direction for the legendary Miles Davis Quintet of the 60s – a set that has some of the angular styles of earlier albums, but also a bit more of the flowing grace to come in the electric years! A key illustration of this is the leadoff track "Prince Of Darkness" ... CD