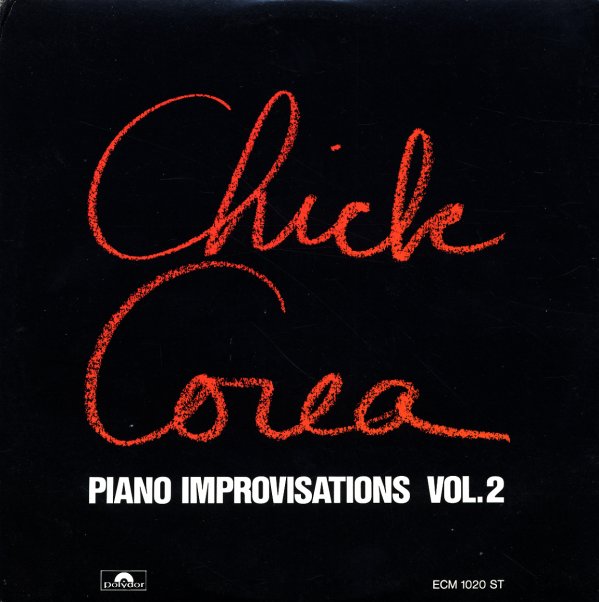 Beautiful solo piano from Chick Corea – almost in a Keith Jarrett mode on ECM – mostly original improvisations, plus extrapolations on work by Thelonious Monk and Wayne Shorter!  © 1996-2021, Dusty Groove, Inc.
(Cover has an unglued seam and some surface wear.)

Conception Vessel
ECM, 1973. Sealed
LP...$29.99
Paul Motian didn't always record that much as a leader, but the dates under his own name are always compelling ones – and quite a change from his more famous work with Bill Evans! This set is a sparkling showcase of original tunes by Motian – played by a shifting array of players that ... LP, Vinyl record album

New Chautauqua
ECM, 1979. Near Mint-
LP...$13.99
A completely solo album from Pat Metheny – but one that still sparkles with the same sort of energy as his fuller group sessions for ECM! At a point when Pat could be content to simply scrawl a few simple lines on the strings of his guitar, he instead does a great job of complicating things ... LP, Vinyl record album

As Falls Wichita, So Falls Wichita Falls
ECM, 1981. Near Mint-
LP...$24.99
One of our favorite Metheny moments ever – and one of the few albums of his that we can go back to, and still enjoy heartily! The album's wonderfully stripped down – and features only guitar by Metheny, keyboards by Lyle Mays, and percussion and vocals by Nana Vasconcelos, all blended ... LP, Vinyl record album

American Garage
ECM, 1979. Very Good+
LP...$9.99
A brilliantly evocative album from Pat Metheny – one that's got a quietly epic feel, as Pat and group soar out across the American landscape in a set of tunes that subtly explore space and sound while still remaining wonderfully fluid. There's nothing forced here, and nothing too slick ... LP, Vinyl record album

Descendre
ECM, 1980. Near Mint-
LP...$24.99 (CD...$16.99)
Classic ECM material from guitarist Terje Rypdal – a set that only features a trio, but which has a wonderfully majestic sound all the way through! Terje plays guitar, keyboards, and flute – somehow finding a moody edge on all three instruments – getting perfect accompaniment ... LP, Vinyl record album