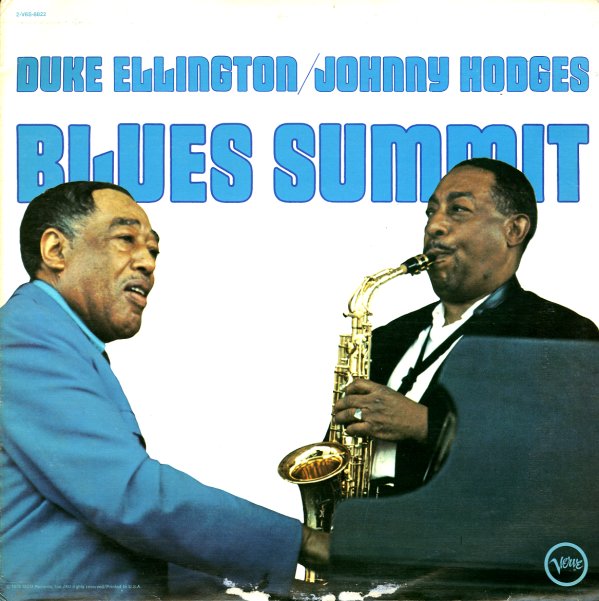 Blues Summit (Side By Side/Back To Back)

A great little album that builds on the strength of Johnny Hodges' small group 50s sessions for Verve – and which lets Duke Ellington in on some of the action! The format is nicely stripped-down throughout – featuring Hodges in sextet and septet formation with players that include Ben Webster, Roy Eldridge, Les Spann, Lawrence Brown, and Jo Jones. And while Duke's actually only on piano on some of the tracks on the album (Billy Strayhorn handles keys on the others), the sessions are still a great example of small combo Ellingtonia at its best! Titles include "Ruint", "Stompy Jones", "Big Shoe", "Going Up", "Just A Memory", and "You Need to Rock". Added to the original album is a full bonus album here – done in a similar format, and titled Back To Back – with titles that include "Weary Blues", "Royal Garden Blues", "Loveless Love", "St Louis Blues", and "Wabash Blues".  © 1996-2022, Dusty Groove, Inc.
(70s MGM stereo pressing. Cover has a cutout notch, light surface wear.)

Going Up With The Duke
VSP (Italy), Late 50s. Near Mint-
LP...$19.99
Italian issued compilation that includes "Going Up", "Loveless Love", "Stompy Jones", and "Squeeze Me" originally released on "Side By Side" and "Portrait Of Ella Fitzgerald" from the Duke Ellington Songbook. LP, Vinyl record album