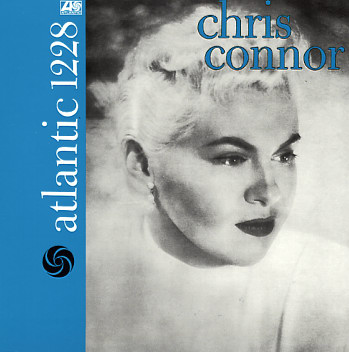 The first album in a legendary run of vocal jazz classics on Atlantic Records – and a set that really helped Chris Connor move to a new level of expression in her music! The sound here is much richer than Connor's previous recordings for Bethlehem – and the small combo jazz backings have been replaced by fuller orchestrations by Ralph Burns – done in a cool, edgey sort of way that really pushes Chris into newly sophisticated territory! The sound's on a par with the best June Christy/Pete Rugolo collaborations on Capitol – and the group's filled with some great jazz players, including Zoot Sims, John Lewis, Milt Hinton, and Oscar Pettiford. Titles include "I Get A Kick Out Of You", "My April Heart", "He Was Good to Me", "Where Are You", and "Get Out Of Town".  © 1996-2023, Dusty Groove, Inc.
(Heavy black label pressing with deep groove. Cover has some surface wear, aging, and some wear at the corners of the spine.)

Chris Connor Sings Lullabys Of Birdland
Bethlehem, Mid 50s. Near Mint-
LP...$29.99
A great set of tracks that represents some of Chris Connor's first recordings as a solo act – culled from earlier ep and 10" releases, and issued here on a full LP with a total of 14 tracks. Backing is by three groups – the Ellis Larkin Trio, Vinnie Burke's Quartet, and Sy Oliver's ... LP, Vinyl record album

Movin' On
Atlantic, 1972. Very Good+
LP...$7.99
A sweet bit of funky jazz vocals from Oscar Brown Jr – recorded during his early 70s stay at Atlantic Records, in a style that's very different than his early work! The tracks are all still original numbers by Oscar – penned with that clever bad-rapping approach to the lyrics that ... LP, Vinyl record album

Mabel Mercer Sings Cole Porter
Atlantic, 1955. Very Good
LP...$2.99
A classic album of Cole Porter tunes – sung by Mabel Mercer with just a bit of tinkling piano in the background! The overall sound's a bit older than you might guess from the date of the record – a mode that takes most of the Porter tunes relatively straight, served up in Mercer's ... LP, Vinyl record album

Brother Where Are You
Atlantic, 1973. Very Good+
LP...$2.99
Sweet 70s funk from the great Oscar Brown – quite a change from his jazz-based work of the 60s, but a great new sitting for all of his wonderful wit and warmth! Brown's still a hell of a songwriter, and one with a very socially-conscious eye – sharper here than before, with lots of ... LP, Vinyl record album

Songs By Bobby Short
Atlantic, 1955. Very Good-
LP...$1.99 2.99
(Mono red and purple label pressing with deep groove. Cover has gloss peel along the opening, splitting in the top seam, and some aging and tears around the edges in back.) LP, Vinyl record album