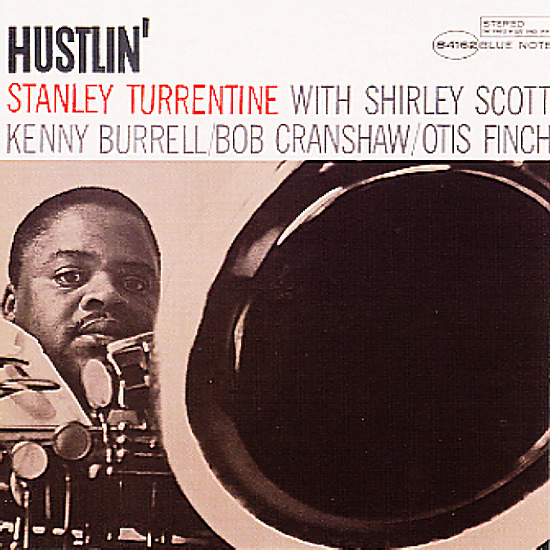 Also available
Stanley Turrentine — Hustlin' ... LP 39.99
One of Stanley Turrentine's few organ-based sessions for Blue Note – recorded in the company of his wife Shirley Scott, a real cooker on the Hammond who holds it down masterfully here – and great band that's filled out by Kenny Burrell on guitar, Bob Cranshaw on bass and Otis Finch on drums. The album's sound has the triple strengths of strong interplay between Stanley's tenor sax and Shirley's organ grooves, rhythms as tightly honed or loosed-limbed as duty calls, and Burrell's guitars rolling gracefully from unfussy backing to refined solos. Tracks include "Trouble No 2", "Goin Home", "Ladyfingers", "Something Happens To Me" and "The Hustler".  © 1996-2022, Dusty Groove, Inc.

Look Out! (RVG remaster edition – with bonus tracks)
Blue Note, 1960. Used
CD...$7.99 (CD...$6.99)
One of the greatest Stanley Turrentine albums ever – a hard-blown session that's been one of our favorite Blue Notes for years! Turrentine's tone here is amazing – really raspy and earthy, with a quality that never shows up much in later recordings – a mode that's incredibly ... CD

Spoiler (non-RVG pressing)
Blue Note, 1966. Used
CD...$6.99 8.99
Stanley Turrentine's no spoiler here – as his tenor sax soars out over the top of some sweet larger group arrangements from Duke Pearson – all awash in a great sense of soul, joy, and life! The album's got a much brighter feel than you might guess from the cover – a vibe that's a ... CD

Look Out! (with bonus tracks)
Blue Note, 1960. Used
CD...$6.99 (CD...$7.99)
One of the greatest Stanley Turrentine albums ever – a hard-blown session that's been one of our favorite Blue Notes for years! Turrentine's tone here is amazing – really raspy and earthy, with a quality that never shows up much in later recordings – a mode that's incredibly ... CD

Bluish Bag (New Time Shuffle/Stanley Turrentine plus previously unreleased tracks)
Blue Note, 1967. Used
CD...$19.99
60s genius from the mighty Stanley Turrentine – an under-reissued album, coupled here with a huge amount of bonus tracks! The first part of the CD features material that was recorded in 1967, but not issued until the 70s – partly on the self-titled Stanley Turrentine album, and partly ... CD

Comin' Your Way (with bonus tracks)
Blue Note, 1961. Used
CD...$14.99 19.99
One of our favorite-ever albums from the great Stanley Turrentine – a really hard-burning session from his earliest days as a leader – and one of the key dates he cut with his brother Tommy Turrentine on trumpet! Both players are wonderful – a sharply soulful team coming off of ... CD