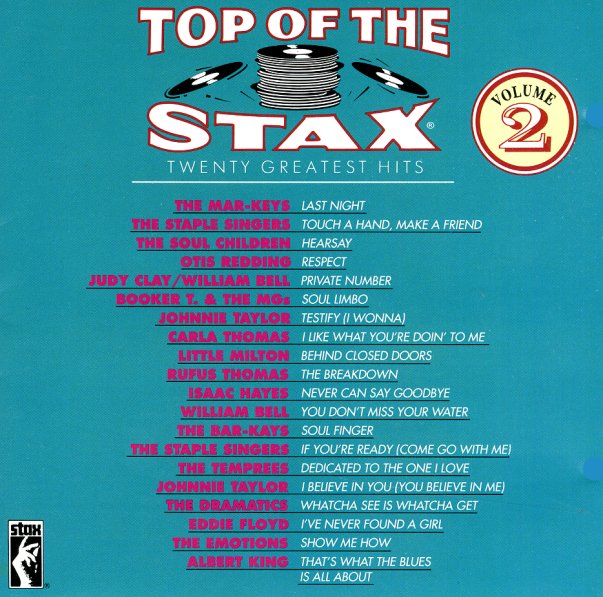 Massive music from this legendary label – a host of classic tracks from Stax Records, nestled nicely into one double-length collection! The package does a great job of covering the full range of Stax sounds – from deep soul to funky soul to group soul, bluesy soul, and lots more too. A handful of tracks here are from the 1968 and before generation – that time when Stax and Atlantic Records had a tight relationship – and the rest are from later years, when Stax was really humming on its own with a host of righteous music! Titles include "Show Me How" by The Emotions, "I've Never Found A Girl" by Eddie Floyd, "Soul Finger" by The Bar-Kays, "Private Number" by Judy Clay & William Bell, "Touch A Hand Make A Friend" by The Staple Singers, "Last Night" by The Mar-Keys, "You Don't Miss Your Water" by William Bell, "Never Can Say Goodbye" by Isaac Hayes, "Behind Closed Doors" by Little Milton, "Soul Limbo" by Booker T & The MGs, "Whatcha See Is Whatcha Get" by The Dramatics, "Hearsay" by The Soul Children, "Respect" by Otis Redding, and "Dedicated To The One I Love" by The Temprees.  © 1996-2022, Dusty Groove, Inc.

Juicy Fruit (Disco Freak)
Stax/Universal (Japan), 1976. Used
CD...$24.99
Hardly the disco set you might guess from the title – and instead, a surprisingly soulful gem from the post-Stax years of Isaac Hayes! There's certainly a bit of uptempo grooving in the mix – but, as on Ike's Polydor years, the approach is still handled with the deeper sounds that ... CD

Lots Of Love
Uno Melodic/Charly (UK), 1983. Used
CD...$16.99
An incredible album by Roy Ayers – but one that's often overlooked because it was a rare indie effort issued between Roy's years at Polydor and Columbia! The session's Roy's only full album for Uno Melodic – the label he formed to showcase the talents of Sylvia Striplin, Ladies Of The ... CD