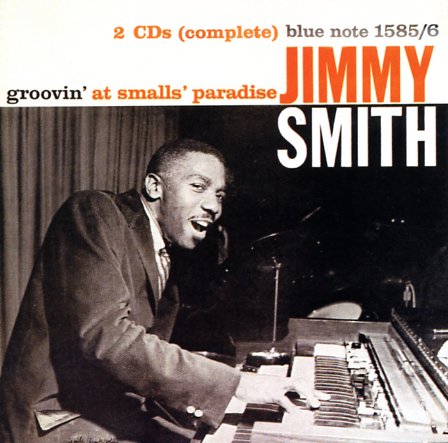 Jimmy Smith live was a killer – especially in the early days, when this one was recorded! Back in the late 50s, when Jimmy was shocking the world with his fantastically creative approach to the organ, Blue Note cut some of the first strong-selling live albums by following Jimmy to the clubs – where he would really let loose with some incredible work on the Hammond B-3. The albums recorded that time shine far brighter than Jimmy's studio work – as you'll hear in this great 2CD set that brings back the rare Groovin At Smalls vols 1 & 2, plus a whole bunch of unreleased material! There's a total of 13 tracks in all – many of them very very long – and all of them featuring Jimmy on organ, Eddie McFadden on guitar, and Donald Bailey on drums. A whopping batch of nice tracks – and titles include "After Hours", "Walkin", "My Funny Valentine", "Laura", "Slightly Monkish", and "The Champ".  © 1996-2022, Dusty Groove, Inc.