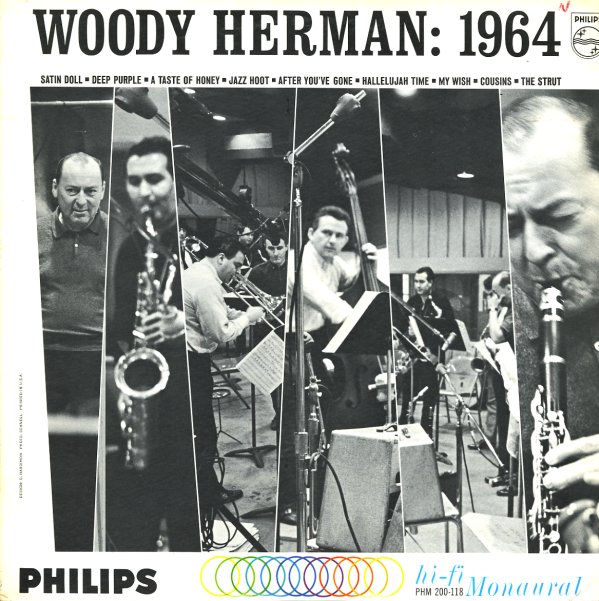 Fourth Herd
Jazzland, 1959. Very Good+
LP...$9.99
A unique album from Woody Herman – a one-off recording for the Jazzland label, and one that has him working with both a full group (his Fourth Herd), and with a smaller combo of players! The album's noteworthy for the presence of some great solo stars – Zoot Sims on tenor, Nat Adderley ... LP, Vinyl record album

Woody Herman 1963
Philips, 1963. Near Mint-
LP...$3.99
Despite what you might think about some of Woody's big band contemporaries from the 40s, you've got to admit that Woody himself was always growing and changing as the decades went on – as this 1963 album will attest! Woody's in great form here – still working with a tight group of ... LP, Vinyl record album

Jazz Structures
Philips, 1960. Very Good
LP...$7.99
An unusual album from the west coast scene of the 60s – recorded under the name of the Lighthouse All Stars, but featuring arrangements and compositions by Bob Cooper – who was the real driving force behind the set. Conte Candoli's in the group on trumpet – and other players ... LP, Vinyl record album

This Is Jazz – 100% Proof
Fontana/Philips (UK), 1966. Near Mint-
LP...$19.99
Seminal work from British tenor giant Tubby Hayes – one of his greatest, and most ambitious albums ever! The album features Tubby at the head of a larger ensemble of jazz musicians, working through his own arrangements of jazz standards – re-worked and expanded in ways that practically ... LP, Vinyl record album