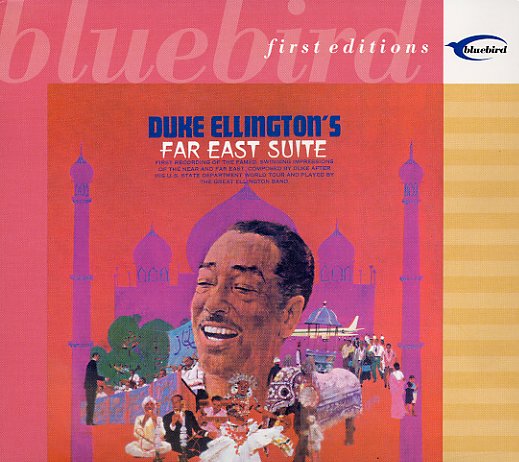 One of Ellington's greatest albums of the 60s – and a record tinged with Eastern themes and darkly angular modern arrangements. The group here features Ellington stalwarts Johnny Hodges, Paul Gonsalves, Harry Carney, Cootie Williams, Mercer Ellington, and Rufus Jones – and the players work together tightly to craft the suite of tracks based on Ellington's impressions of recent travels through the Mid and Far East during the 60s. Titles include "Tourist Point Of View", "Isfahan", "Depk", "Mount Harissa", "Amad", "Agra", and "Blue Pepper". Plus, the CD reissue features 7 alternate takes not on the LP!  © 1996-2020, Dusty Groove, Inc.

Duke Ellington & His Orchestra Vol 3 – 1943 & 1945
Circle, 1943/1945. Used
CD...$8.99
The volume three of the complete World Broadcasting recording sessions collects one session from late 1943 and two sessions from early 1945. As with the rest of the series this set features all available material including false starts and alternate takes. Tracks include "Somebody Loves ... CD

Art Blakey & The Jazz Messengers Au Theatre Des Champs-Elysees
RCA (France), 1959. Used
CD...$11.99
Rare live work by the Jazz Messengers – recorded in Paris in 1959, and originally issued only in France! This set captures the group in the prime Blue Note years – with Lee Morgan on trumpet, Wayne Shorter on tenor, Walter Davis Jr on piano, and Jymie Merritt on bass – all ... CD

Jazz Workshop
RCA/Bluebird, 1957. Used
CD...$8.99
Very hip early work from George Russell – a set that's maybe not as high-concept as some of his later records, but which still has a strikingly modern vibe! Russell's trying out some of his new tonal ideas here – and has a group that's very well-chosen for the project – with Art ... CD

JJ!
RCA/BMG (Germany), 1965. Used
CD...$9.99
A beautiful example of the mid-60s power of JJ Johnson – a big band session that features arrangements by JJ, Gary McFarland, and Oliver Nelson – all a very cooking mix of modernism, soul, and swing! The groups are large on all numbers, but there's plenty of room for Johnson to solo ... CD